Witness says ex-Sheriff Lee Baca was 'engine of the train...then cut us loose' 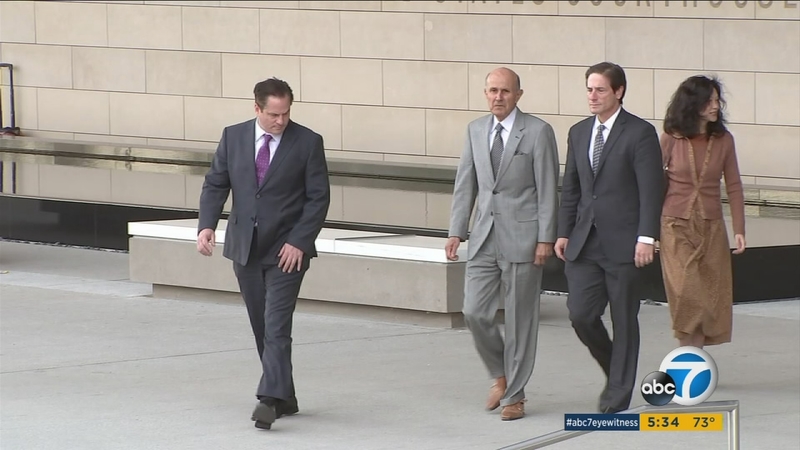 Witness says ex-sheriff was 'engine of train...then cut us loose'

LOS ANGELES (KABC) -- Former Sheriff Lee Baca watched two LASD sergeants illegally intimidate and threaten an FBI agent with arrest outside her home - and laughed, saying "it was the best laugh he'd had in months," according to testimony at Baca's corruption retrial Friday.

Baca has denied he knew anything about that confrontation until hours after it occurred.

"Had I been told that this was part of the current process, I would have said, 'Don't do that,'" Baca told federal prosecutors and FBI agents in an April 2013 recorded interview played for jurors on Friday.

Prosecutor Brandon Fox asked Carey if that was accurate.

The answers Baca gave under penalty of perjury to federal agents in that 2013 interview form the basis for the false statements felony charge he faces.

Baca is on federal trial for that -- along with conspiracy and obstruction of justice in connection with a 2011 scheme to block an FBI investigation into L.A. County jails. Baca has pleaded not guilty.

So how deeply was he involved in the cover up?

"He was the engine of the train," Carey said. "Then it was like he cut us loose."

The former captain told jurors he became increasingly "uncomfortable" with actions he and other investigators were taking, as it became more clear that the FBI had committed no crime with their sting inside the Men's Central Jail -- by bribing a corrupt deputy to smuggle a contraband cellphone into inmate-turned-FBI informant Anthony Brown.

Carey said he and other LASD personnel were "following orders" from the top.

"In retrospect, our moves, our tactics -- were obstruction," Carey told the jury. "In my opinion, we were stepping on the toes of the FBI by showing up at her house, and if that was going to occur, it was only going to occur with Sheriff Baca's OK."

Carey was indicted along with Tanaka in May 2015.

FBI agents and federal prosecutors have methodically worked their way up the ranks, winning convictions and prison sentences for seven other deputies, sergeants and lieutenants who played roles in the plot to block the FBI's investigation into jail corruption and deputy brutality.

All have said they were following direct orders from the very top of the Los Angeles County Sheriff's Department.

Tanaka was convicted of conspiracy and obstruction of justice last year and surrendered in January to begin serving five years in federal prison. He is appealing his conviction.

Carey took a plea deal in August 2015 and began cooperating with prosecutors. He agreed to plead guilty to one count of making false statements in connection with his testimony at the trials of lower-ranking deputy sheriffs.

"I was trying to help my guys," Carey said of his previous testimony. "We were following the direction of the sheriff."

On cross-examination, Baca defense attorney Nathan Hochman pointed out that Carey had been facing up to a statutory maximum of 25 years in prison.

Carey's cooperation with prosecutors could potentially lead to a reduction of his sentence, although the decision is ultimately up to federal Judge Percy Anderson.

Hochman elicited testimony from Carey that - yes, a cellphone in the hands of a jail inmate can be dangerous and could possibly be used to kill witnesses or plot escapes. Photos of drugs found on the cellphone raised alarm bells and inmate Brown claimed to have $8 million on the outside at his disposal.

But initial fears that the FBI may have arranged for drugs to be smuggled into the jail diminished over time - and particularly after inmate Brown took a polygraph.

"We were coming up with goose eggs," Carey testified of investigators efforts to establish whether or not the FBI had committed any crime.

Hochman asked Carey if Baca was aware of surveillance being conducted on FBI agents by LASD investigators. Baca, at the time, was out of the country. Carey said no.

Did Baca order LASD sergeants to arrest or threaten to arrest the FBI agent?

But added Baca was fully aware of the plan to approach Marx and "send a message" to the FBI.

"His advice to us was not to put handcuffs on her. Send a message, but don't arrest," Carey said.

Hochman asked Carey how he could remember the events of that summer so clearly.

"It's something I've thought about literally thousands of times," Carey said. "We told him. And then for him to deny it..."