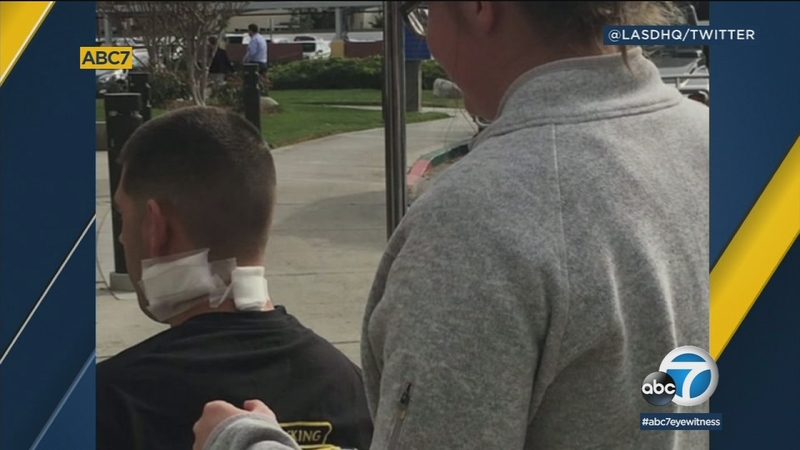 SANTA CLARITA, Calif. (KABC) -- A Los Angeles County sheriff's deputy was wounded in the neck and a suspect was critically injured during a shootout Tuesday night in Santa Clarita, authorities said.

The deputy was in stable condition Wednesday morning and expected to survive. The suspect was listed in critical condition.

Authorities said the incident unfolded in the 21300 block of Bottle Tree Lane shortly after 10 p.m. when deputies responded to a call of an assault with a deadly weapon.

"One of the suspects approached the female victim, who was parking her vehicle, and pointed a handgun at her," according to a sheriff's statement. "She retrieved her cellphone to report the incident and the suspect fled near the pool area of the apartment complex."

Deputies arrived at the scene, contacted the victim and subsequently found one of the two suspects in a parking area near the pool, the news release said.

A shootout involving four deputies occurred when the suspect, a 29-year-old man, "fired his handgun toward them," authorities said.

The deputy and the suspect were both transported to a hospital. The suspect, whose handgun was recovered at the scene, underwent surgery after being struck at least once in the torso, according to sheriff's investigators.

According to the sheriff's department, the suspect who was wounded was a documented gang member who had just been released from jail on parole.

Among the charges the suspect was imprisoned for was assault with a deadly weapon, authorities said.

"It's frustrating," said Sheriff Jim McDonnell. "Within days, probably, he's armed himself and out there and preying on the public again."

A perimeter was set up in the area to search for the second suspect, who was located in an apartment.

SANTA CLARITA UPDATE: Sheriff’s deputy expected to survive after being shot through the neck; suspect wounded in critical condition. MORE on @ABC7 5:30am! LIVE: https://t.co/a8eFAqjJ8p pic.twitter.com/LPjWHDDoIh

"He is being questioned by investigators to ascertain his involvement in this incident," the news release said. "He has not been arrested at this time."