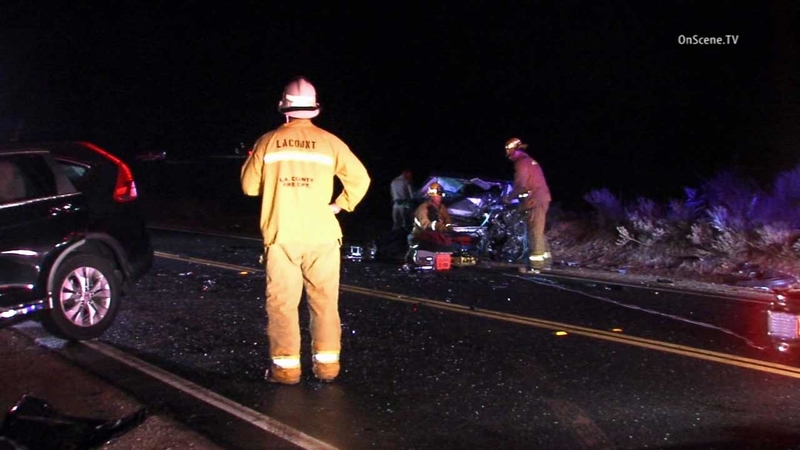 The crash occurred near San Francisquito Canyon Road and Stator Lane at about 9:45 p.m.

The sheriff's deputy, 31-year-old Brandon Arce, was on his way to work and in uniform when he crashed into a vehicle near the Castaic Lake State Recreation Area, L.A. County Fire Department Dispatch Supervisor Kyle Sandford said.

Both drivers were transported to Henry Mayo Hospital in Valencia, where the sheriff's deputy succumbed to his injuries. Sanders was seriously injured but is expected to survive.

Investigators said alcohol and drugs do not appear to be a factor in the collision.

"We have ruled out alcohol and drugs and we do not believe [a] cellphone was involved because there is no reception up there, and anybody who drives up there, at any point, knows that," CHP Sgt. Rick Miller said.

San Francisquito Canyon Road is a twisty two-laner, and Miller says even a second of inattentiveness could send a driver out of lanes.

It's one possible cause for this crash CHP officials are now exploring, along with speed.

"A road like that you need 100 percent of your attention drawn to what you're doing," Miller said.

Meanwhile, investigators say Arce was not wearing his seatbelt.

"Wear your seatbelt. It saves your life. He may have had a shot," Miller said.

Deputy Arce began his career with the Los Angeles County Sheriff's Department in the fall of 2007 and was sworn in as a Deputy Sheriff in 2008. His most recent assignment was at the North County Correctional Facility in Castaic.

In a press release issued Thursday, Sheriff Jim Mcdonnell stated in part: "We are deeply saddened by the loss of Deputy Brandon Arce, and our thoughts and prayers are with his family and friends," he said. "Law enforcement is a close knit community and when we lose a member of our family, the loss is definitely felt by everyone."