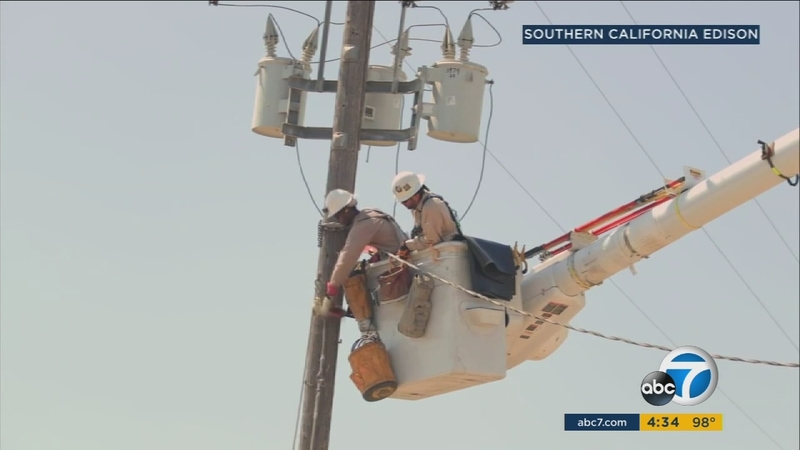 The Los Angeles Department of Water and Power tweeted that demand for electricity reached 6,555 megawatts around 3:34 p.m. Friday, beating a record that had been set just the day before at 6,502 megawatts.

The high energy demand and blistering heat has led to several power outages across Los Angeles County since the hot weather system started on Monday. Since then, thousands of customers each day have lost power for hours on end.

As of Friday afternoon, 9,300 customers across the county were without power, according to LADWP. Crews were expected to work overnight to restore service.

"It is a result of high overnight temperatures, high level of air conditioning use and just overall demand on the system," said Robert Villegas, with the utility company.

Edison said outages in its service areas have been sporadic, but crews throughout their 50,000 square mile territory are making repairs as quickly as possible.

State officials also issued a Flex Alert until 10 p.m., which means people with electricity are asked to keep their thermostats at 78 degrees or higher and use large appliances in the morning instead of the evening hours.

"Here in Southern California, we have 5 million customers, so a little tiny bit of conservation from each of those customers really adds up and can really help shape the peak demand," Villegas said.

The heat has also brought about wild weather across Southern California, such as thunderstorms, lightning, hail and winds. The sudden storms brought down power lines, making it even more difficult for power crews and residents.

Forecasters said more monsoonal moisture combined with the heat could be coming when remnants from Tropical Storm Lidia move north from Baja California over the weekend.