The Dodgers moved one step closer to advancing in the postseason following a 4-2 win over the Milwaukee Brewers in Game 1 of the National League wild-card series.
KABC 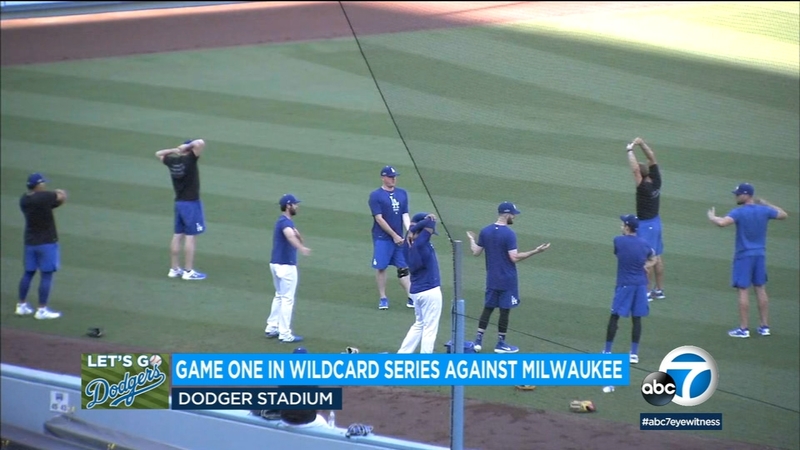 LOS ANGELES (KABC) -- The Dodgers moved one step closer to advancing in the postseason following a 4-2 win over the Milwaukee Brewers in Game 1 of the National League wild-card series.

Los Angeles took an early lead in the first inning and held on for the rest of the way. The team scored two runs in the first and then added another in the second.

Milwaukee scored two runs of their own in the top of the fourth, but Dodgers closer Kenley Jansen closed out the Brewers in the ninth.

Mookie Betts had two hits and an RBI, Corey Seager homered in the opener. Chris Taylor doubled leading off the second and scored on Betts' double, making it 3-0.

The Dodgers could have inflicted more damage but were just 1 for 7 with runners in scoring position in the first two innings.

L.A. needs one more win to advance to the NLDS.

The Dodgers came in with the best record in the majors. More home runs than anyone. Best bullpen ERA and home record in the National League.

The Dodgers have checked nearly every box on the way to their eighth straight postseason appearance.

It has been 32 years without a championship for the Dodgers.

Betts was as good as advertised in his first season in Los Angeles, hitting 16 homers at the top of the order. He led the team in stolen bases with 10.

"With Mookie at the top kind of setting that tone, it just has that trickle down effect," third baseman Justin Turner said. "Our entire order takes pride in grinding out at-bats and making guys work. We have a lot of guys that can hurt you with one swing."

The eighth-seeded Brewers advanced to their third straight postseason appearance for the first time in franchise history.

Milwaukee reached the 2018 NL Championship Series, losing to the Dodgers in seven games. It's the only other time the teams have met in the postseason. They haven't faced each other since the 2019 season.

The Dodgers lost back-to-back World Series appearances in 2017 and 2018; they were eliminated in five games by Washington in last year's NL Division Series.

As good as the Dodgers have been, the Brewers never moved above .500 all season and finished with a losing mark of 29-31, getting into the postseason thanks to holding a tiebreaker over the San Francisco Giants.

Roberts believes the Dodgers can overcome whatever the Brewers throw at them.

"You got to expect anything - the gamesmanship, getting the lineup late or throwing a pitcher for a hitter or going to the 'pen," he said. "We can sort of combat anything."

The Dodgers started right-hander Walker Buehler in Game 1. He has battled a blister that sent him to the injured list twice in the last month. He reached out to consult former teammate Rich Hill, who dealt with blisters several times as a Dodger pitcher.

Anderson left his last start early with a blister on his left index finger. His absence makes Milwaukee's starter in a potential Game 3 uncertain.

Williams emerged as one of baseball's top relievers this season and is a candidate for Rookie of the Year.

Williams, who last pitched last Friday, went 4-1 with a 0.33 ERA and 53 strikeouts in 27 innings. He gave up eight hits and one earned run all season while forming a dynamic duo with closer Josh Hander at the back end of Milwaukee's bullpen.

Making the roster of 12 pitchers and 16 position players are designated hitter Daniel Vogelbach and outfielder Ben Gamel. Their status had been uncertain due to quadriceps injuries.