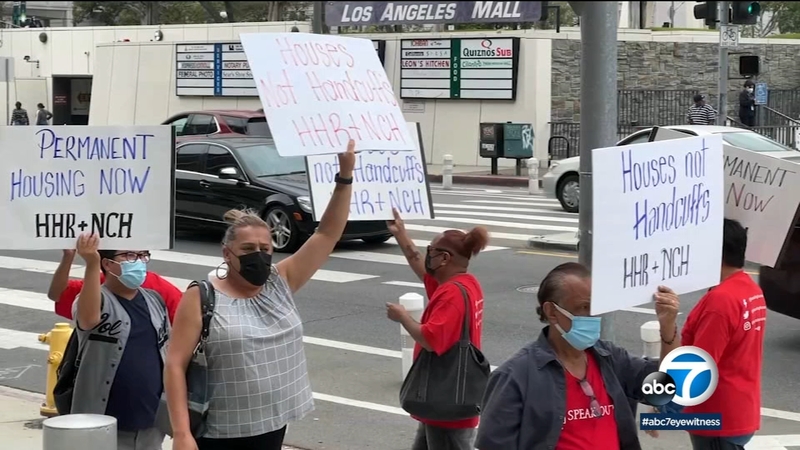 LOS ANGELES (KABC) -- Coalitions of housing advocates are rallying in several U.S. cities. They're calling on policymakers to find permanent and humane solutions to homelessness.

"The rent is too damn high," chanted a group of marchers at a rally in downtown Los Angeles Friday. The chant has been a years-long rallying cry for housing advocates.

"A lot of people are on the streets and it's not right. The rent keeps going up and up," said George Malouf who has been unhoused in the past. "I want to make a difference."

The march was part of a new partnership between "Housing is a Human Right" and the National Coalition for the Homeless (NCH), which is now opening an office in California.

Rallies with the NCH and the "Poor People's Campaign" are taking place this weekend in different parts of the country. In Los Angeles, there was a particular emphasis on encampment sweeps.

"That is not a permanent solution for homeless," said Eduardo Martinez with Housing is a Human Right. "They keep people out of one street. What they're going to do is move to another street, and do the same thing."

They're urging government leaders to focus on a model of permanent affordable housing first.

Some of the people who marched Friday say they meet with unhoused community members every week, and get to know why they are currently unhoused.

"Young people are in foster care. They age out. They don't have nowhere to go," said Stanley Chatman with Housing is a Human Right. "They don't have the luck of having parents or friends or family that help them, and they end up on the streets."

One woman who was riding her bike near the site of the rally told Eyewitness News that she's been unhoused for four years, and that due to poor follow-up, she was unaware that she was eligible for shelter until recently.

"There's a lot of people out there still that are unhoused," she said. "They've been out there for over 10, 11, 12 years, and the government here needs to do what's right with the money, and make it right, and do right by everybody."