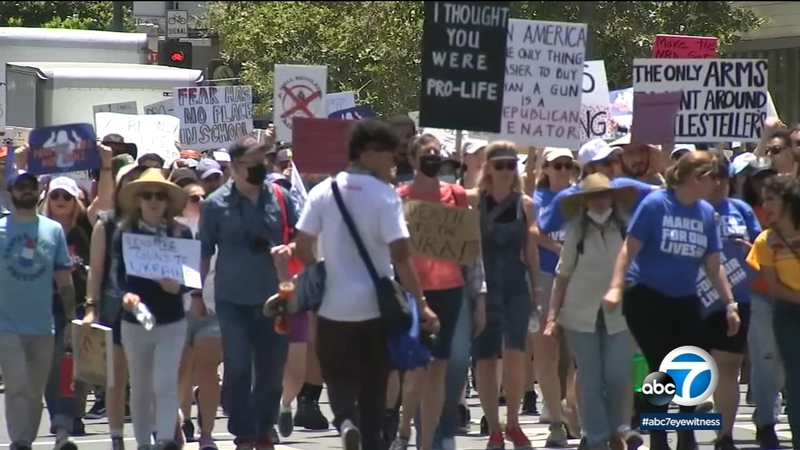 LOS ANGELES (KABC) -- Hundreds took part in a "March For Our Lives" rally in downtown Los Angeles Saturday, in which a peaceful, but determined group of demonstrators, demanded that lawmakers take action to prevent gun violence.

"We have more guns than we have people in this country," said Hasan Piker. "It's increasingly easy to get your hands on more. And the common-sense solutions are simple, and yet politicians can't seem to get anything done."

The march and rally came after a recent series of deadly mass shootings, including the massacre at an elementary school in Uvalde, Texas.

Some in the crowd are relatives of victims of gun violence, others are survivors of mass shootings.

In 2018, Cameron Kasky, one of the organizers of Saturday's event, was a student at Marjory Stoneman Douglas High School in Florida when a gunman walked in and killed 19 people.

Demonstrators say they won't give up, and they won't stop fighting for change.

"One in 3,000 Americans will be shot this year," said Dr. Jeffrey Birnbaum who works at the Children's Hospital Los Angeles. "This is not normal, and this is not OK. I do not accept that this is the price that we have to pay to live in this country. This is an epidemic."

Activists say they are planning, what they're calling, a national week of resistance in October.