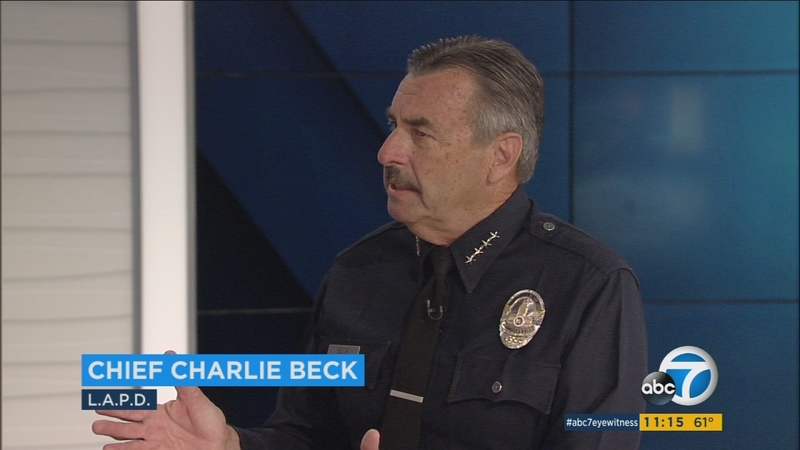 Beck said in the wake of recent terrorist attacks, the department has increased its presence at larger places where people gather such as sporting arenas and concert venues.

But Beck emphasized that it is still difficult to monitor every area so citizens need to be vigilant.

"The public needs to work with law enforcement to keep all of us safe. That's why it's so important - If you see something, say something," he said. "If something seems out of the ordinary or may be terrorist related, in your opinion, then please let law enforcement know so we can vet it out. That's the way that we can keep each other safe."

He added that if citizens do not feel comfortable making a phone call, they can use the mobile application iWatch LA. The app allows users to provide any information to the police department.

Beck went on to say that increased reports of suspicious behavior or weird instances can help prevent further attacks, such as the San Bernardino attack that took place at the Inland Regional Center on Dec. 2.

He said calls from neighbors and those who trust their instincts can help prevent such tragedies.

"Trust those instincts and then let us vet it out. We're very particular...we firmly stand with the constitution on this, we make sure that we don't take enforcement action based on just hunches or tips, but we can vet things out," he said.

He said it is important that the department puts de-escalation training, when appropriate and possible, to resolve tense situations.

When asked if people understand what officers go through during those situations, Beck said entertainment media creates unrealistic portrayals of authorities - positive and negative - that can make it difficult.

"LAPD cops do a really tough job in a really tough environment, and they do it to a very high standard...does that mean we can't improve? Of course it doesn't. There is no human endeavor, no human effort that can't get better," he said.

He went on to say that another area where officers are receiving more training is on how to handle mental health issues among citizens.

By the end of the year, the department will have more than 100 smart teams, which are police officers teamed with a mental health professional from the Department of Mental Health, Beck said.