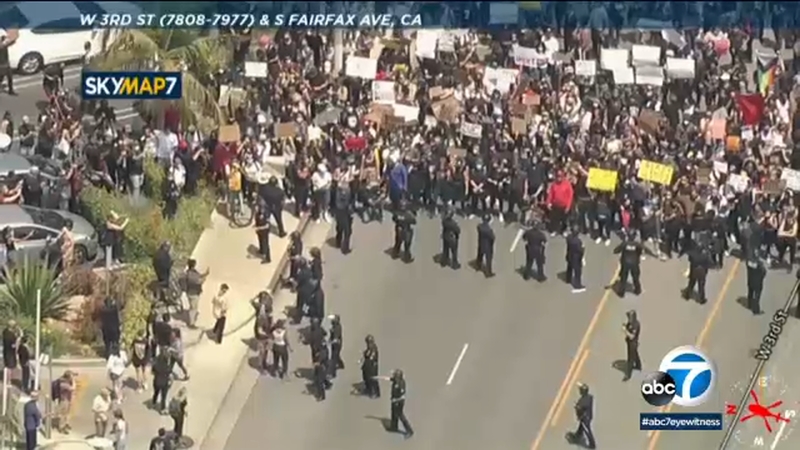 LOS ANGELES (CNS) -- Los Angeles and its police department have until Friday afternoon to submit an argument in opposition to a request from Black Lives Matter-Los Angeles seeking a federal judge's emergency order banning police from using rubber bullets, baton blows and other crowd control tactics during demonstrations.

According to its application, BLM-LA is seeking an end to the LAPD's use of:

-- Projectiles, including rubber bullets, to disperse or otherwise control crowds of protesters;

-- baton strikes against protesters, or for crowd control purposes unless attacked. Batons should not be used in a manner that would cause bruising or physical injury to demonstrators;

-- holding persons charged solely with infractions in custody for the purpose of detaining such persons; instead, police should be required to cite and release anyone charged with an infraction within 15 minutes of apprehension in the field and not detain them in buses, in parking lots or garages, or any other facility used for the purpose of detaining individuals charged with a violation of an ordinance punishable solely as an infraction;

-- holding persons charged with misdemeanors more than an hour; instead, police should book and release such persons in less than an hour, using mobile booking technology if necessary;

-- to the extent arrested protesters are detained in buses or transported to a booking facility, police should be restrained from holding them in such detention or in handcuffs for more than 30 minutes or when persons complain of tight handcuffs, and also stopping police from refusing access to water and bathroom and medical care, if needed; and

-- to the extent arrested protesters are detained in buses or otherwise in close custody for more than 10 minutes, officers must not fail to follow basic public health guidelines to lessen the chance of exposure to the COVID-19 virus, including social distancing, officers wearing face masks in the buses and the application of basic sanitation in buses or other places of detention necessary to reduce exposure to the coronavirus.

In a federal lawsuit filed earlier this month by the Los Angeles chapter of the National Lawyers Guild, Black Lives Matter and Los Angeles Community Action Network, the plaintiffs maintain there were more than 3,000 arrests over the course of several days of demonstrations.

In most cases, the plaintiffs contend, demonstrators' civil rights were trampled on and many peaceful protesters were shot by rubber bullets, struck with batons or left for hours tightly handcuffed on darkened buses.

Although LAPD does not comment on pending litigation, a spokesperson said the department will investigate every allegation of misconduct or excessive force stemming from the protests from May 29-June 3 triggered by the in-custody death of George Floyd in Minneapolis.

The 59-page amended complaint includes graphic photos of alleged protester injuries from rubber bullets and police batons, as well as descriptions of protesters who were held in buses in cramped conditions without access to restrooms, and injuries from too-tight handcuffs.

The lawsuit contains photos of wounded protesters and detailed accounts of alleged mistreatment. Some incidents caught on video show LAPD officers using batons and other weapons on protesters.

When the L.A. City Council's special police reform committee meeting began, Councilman and Chair Herb Wesson called on his colleagues to make history. "Let's let it take us as far as it can take us, if we're serious about being impactful."