Protesters gather in Los Angeles for 'Day of Resistance'; 4 arrested 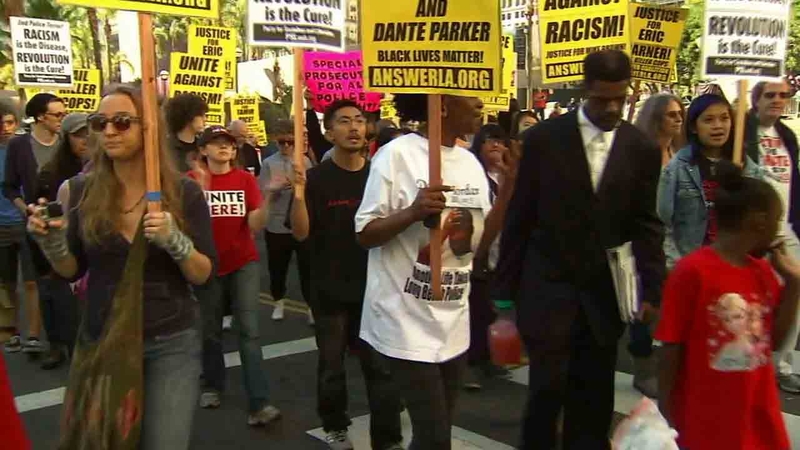 Protesters gather in Los Angeles for 'Day of Resistance'; 4 arrested

LOS ANGELES (KABC) -- Hundreds of protesters marched through Los Angeles Saturday and cities across the nation in protest of police brutality and racial disparities in policing.

Demonstrators gathered at Pershing Square and near the busy intersection of Hollywood Boulevard and Highland Avenue at 1 p.m. to march against police brutality. At least four were arrested on suspicion of failing to disperse when ordered in Hollywood, police said.

The Hollywood intersection marks the spot where an allegedly knife-wielding suspect was shot dead by police on Dec. 5.

Dozens made their way to Los Angeles Police Department headquarters in the 100 block of Spring Street, where they staged a die-in. The latest march held in downtown Los Angeles Saturday was organized by the groups Answer Coalition, Stop Mass Incarceration Network and Black Lives Matter, and coincided with protest marches across the country.

Those who turned out say the only way things will change is if they join forces all across the country in calling for a massive change.

"From the East Coast, New York, Eric Garner, to the Midwest, Dontre Hamilton, to Los Angeles, people are being shot down in the street, and police aren't forthcoming about what's been going on," said Lawrence Soley of Palm Springs.

In San Francisco, outraged protesters staged a die-in on Market Street. Protests in downtown Oakland continued well into the night. Groups of people trailed by police shut down several intersections. The view from a news helicopter showed at least one person being taken into custody.

Earlier in the day, three cardboard cutouts of black men and women were found hanging by nooses on the UC Berkeley campus. At least one effigy had "I Can't Breathe" printed on the front. School spokeswoman Amy Hamaoui said the effigies appear to be connected to a noon-time demonstration.


The largest march held Saturday took place in our nation's capital. Thousands of protesters converged on the Capitol building, calling on Congress to take action.

The families of Michael Brown and Eric Garner were among those at the "Justice for All" march, where protesters carried signs reading "Black Lives Matter."

PHOTOS: "Justice for All March" in Washington, DC 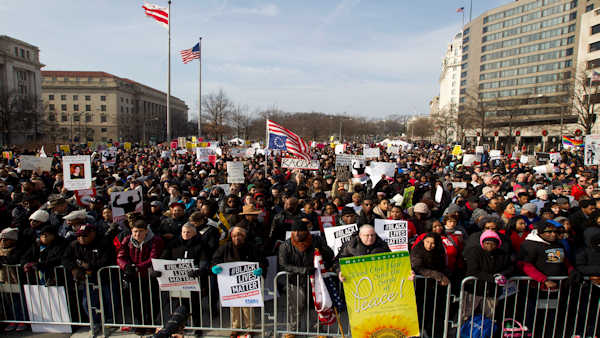 PHOTOS: 'Justice for All March' in Washington, DC
Civil rights organizations are holding a national march in Washington with the families of Michael Brown and Eric Garner to help bring attention to the issue of police brutality.

"It's just so overwhelming to see all who have come to stand with us today," she said. "I mean, look at the masses. Black, white, all races, all religions. ... We need to stand like this at all times."

Joining the Garners in Washington were speakers from the family of Tamir Rice, a 12-year-old killed in Ohio as he played with a pellet gun in a park, and the mother of Amadou Diallo, who in 1999 was shot and killed in the Bronx by four New York City police officers.

Also in attendance was the family of Trayvon Martin, who was fatally shot by a neighborhood watchman in Sanford, Florida, in 2012.

In Boston, about two dozen people were arrested for disorderly conduct after scuffling with officers blocking an Interstate 93 onramp near the Nashua Street Jail.

The noisy march through the heart of Manhattan swelled to at least 25,000 people, police said. Thousands of protesters took to the Brooklyn Bridge, causing it to temporarily close to traffic. The New York Police Department said two officers were hospitalized after being assaulted during the protests.