Garcetti doubles down on LA being sanctuary city for immigrants 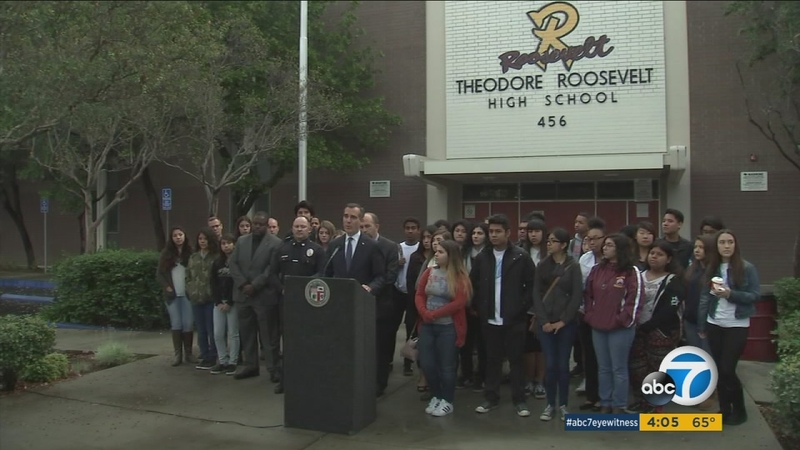 Mayor Garcetti doubles down on LA being sanctuary city for immigrants

LOS ANGELES (KABC) -- Los Angeles Mayor Eric Garcetti said the Southland would remain a sanctuary city for immigrants and backed those statements up when meeting with concerned students and officials on Monday.

Garcetti met with students from the Los Angeles Unified School District and city leaders who were concerned about President-elect Donald Trump's immigration plans.

After numerous student walkouts and protests, the mayor hoped to quell some of the uncertainty many have felt following the election.

"A lot of them are scared for their families. If their parents are undocumented, etcetera, they're scared about what's going to happen," student Sydney Ross explained.

"The idea that a city would decide to ignore federal law and then want the federal government to help them anyway, it's an inconsistent position for those local governments to continue to engage in," Preibus stated.

The mayor echoed past statements that Los Angeles would not act as the immigration police.

In regards to the potential threat of federal funds being pulled from the city, Garcetti said he believed such a move would have far-reaching nationwide implications because the money helps fund the Port of Los Angeles and Los Angeles International Airport.

"I think anything that would take away federal aid would cause social, economic and security problems," the mayor stated. "So I'm hoping that we can have those conversations separate and without threats."

Students said after Monday's meeting they felt more confident that their friends and families would remain protected in the city.