'We are not broken,' Garcetti vows in LA State of the City address

In his State of the City address Mayor Eric Garcetti said Los Angeles feels like it's under attack during the coronavirus crisis, but he vowed "we are not broken."
KABC
By Leanne Suter and ABC7.com staff 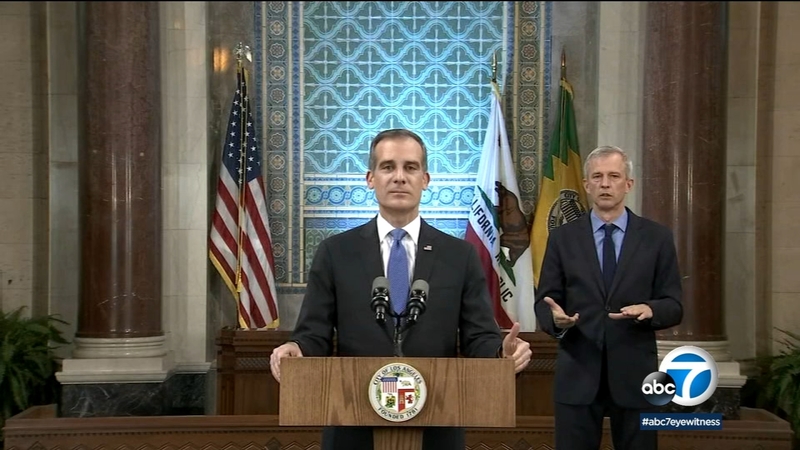 Garcetti delivers State of the City: 'We are not broken'

LOS ANGELES (KABC) -- Under the most challenging times of his term, Mayor Eric Garcetti delivered his State of the City address on Sunday, saying the city feels like it's under attack during the coronavirus crisis, but vowing "we are not broken, nor will we ever be."

The speech came a month after Garcetti and Los Angeles County officials released "safer-at-home" orders for closing non-essential businesses and maintaining social distancing, orders which have now been extended until mid-May.

The coronavirus pandemic, Garcetti said, has badly damaged the city's economy as well as the revenue of city government.

His voice breaking, Garcetti acknowledged: "Our city is under attack. Our daily life is unrecognizable. We are bowed and we are worn down. We are grieving our dead."

"But we are not broken. Nor will we ever be."

Garcetti is expected to release his proposed budget for the next fiscal year on Monday. One of the steps the city is taking is to ask civilian employees to take 26 furlough days this year, equaling a 10% reduction in costs.

Unemployment in the city has also skyrocketed to over 300,000 worse than at the height of the 2008 recession.

And the mayor said air travel at Los Angeles International Airport is down an incredible 95%, the largest drop in the airport's history.

Garcetti called on the federal government to provide more aid to cities as they face a huge hit to revenue.