With the golden state set to reopen in June, state and local officials stress residents shouldn't let their guard down because there could be a spike in COVID cases.
KABC
By Eric Resendiz 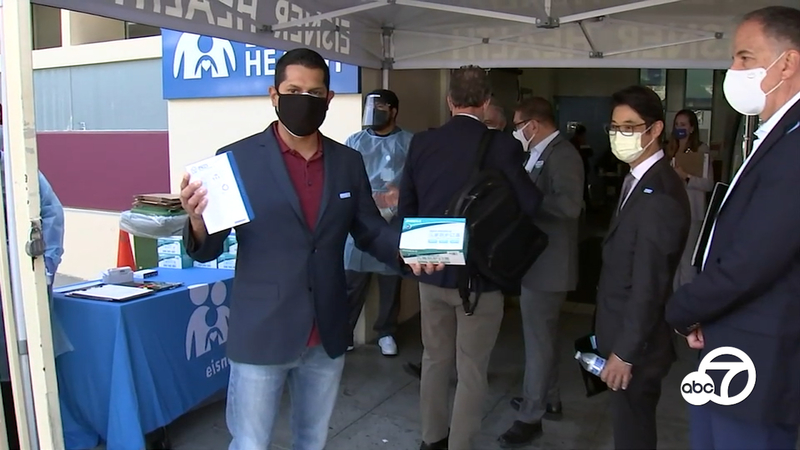 DOWNTOWN LOS ANGELES (KABC) -- In preparation for the state reopening in June, state and local officials announced a plan to help those who need it most. They'll be donating thousands of PPE equipment to vaccine sites in hard-hit areas.

"It's really great because mask prices are going up and they're going crazy about it," said Stephanie Martinez, who received free PPE at a vaccine site in Downtown Los Angeles. "It's a really good compliment. I didn't expect it."

Officials started by donating 40,000 masks to an Eisner Health vaccine site in DTLA. They want to ensure equitable distribution of PPE in hard-hit areas and are stressing telling residents they shouldn't let their guard down.

"This is absolutely critical. Because if folks let their guard down, we will see a spike," said Assemblymember Miguel Santiago, who represents DTLA and the surrounding area. "We're doing everything possible. But we want to remind you there's still a variant out there and the entire population is still not vaccinated."

As of April 8, state and L.A. county officials said there are 710 new COVID cases in the county and about 45% of the county's over 16 population has received at least one dose.

"Because in these areas were the hardest hit. We remind you, not too many blocks away is Skid Row. Not too many miles, about a mile and a half away you enter the Eastside where frontline workers are still going out and the vaccination rates are still low and we're kicking up the campaign for people to get vaccinated," said Assemblymember Santiago.

The Los Angeles County Medical Association said their goal is to deliver one million masks and about 10 thousand thermometers to clinics in areas that need it most.

"I think that's really great," said Martinez. "Especially this community, low-income areas don't really get the, how can you say, that help very much."

According to officials, the PPE equipment is for patients receiving the vaccine and healthcare workers at the sites.

"Masks do save lives. We're so close. Don't strike the ball on three-yard line. Lets rush it into the end zone," said Jeffrey Lee, president-elect of the Los Angeles County Medical Association.