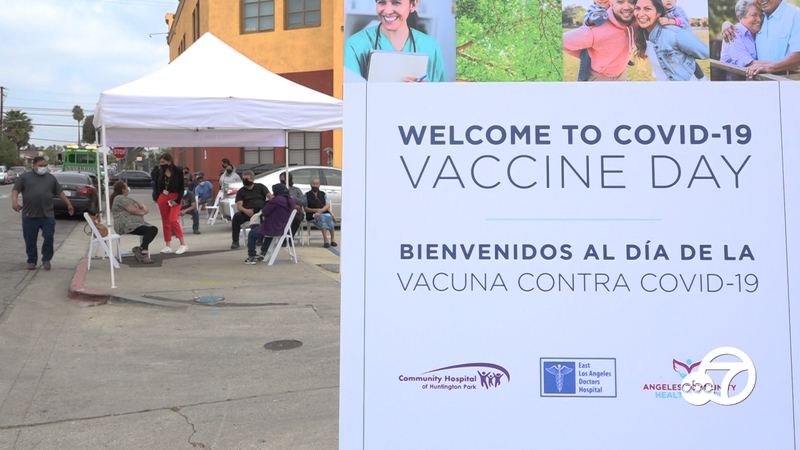 EAST LOS ANGELES (KABC) -- Among the many efforts to help areas hard-hit by COVID-19, the Angeles Community Health Center added a new vaccine van that will pop up in these communities to vaccinate eligible residents. On Monday, they started at East Los Angeles Doctors Hospital in East L.A.

"I actually live five blocks away from my house and it's fantastic," said Richard Carpena, who received the vaccine at the site.

Hospital officials said they hope residents will take advantage of this resource.
But they also said anyone from outside the area could book an appointment.

"When we knew that they're going to give the vaccine we took the opportunity and made our appointments and we are happy," said Diana Armenta, a resident of Arcadia who was vaccinated at the East L.A. site.

This effort was done in partnership with local hospitals and the Pipeline Health Network.

"I know in this area there's many undocumented and I think they're afraid to go to a lot of places," said Carpena. "They'd feel better if it's in their community."

According to Los Angeles County data released April 9 and current through April 4, East and Southeast areas have 28 to nearly 33 percent vaccination rates, which is still behind some of the more affluent areas in Los Angeles County.

But rates seem to be getting better in more underserved areas. Vaccination rates in those areas on April 4th were double what they were nearly a month ago, on March 8.

"What we're doing today is to create access and equity among our patients that have many barriers to care such as transportation and inability to make appointments on their own for vaccination sites," said Dr. Peyman Banooni, CEO of the Angeles Community Health Center.

According to hospital officials, because of the resources made available, their goal was to vaccinate 100 people on Monday.

"I feel fantastic. I feel sometimes living in East L.A. we're underserved. But I think this is a great opportunity," said Carpena.

The vaccine van will operate five days a week and pop up at different East and South L.A. locations.