Luke Walton accused of sexual assault, according to court documents 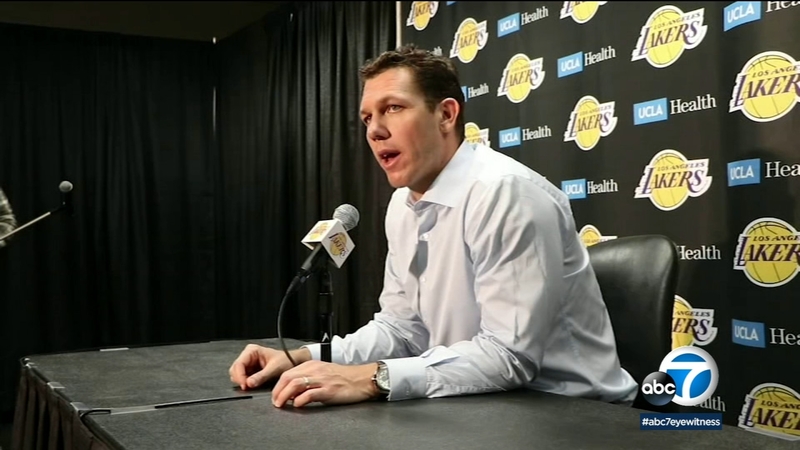 Luke Walton accused of sexual assault, according to court documents

LOS ANGELES (KABC) -- Former Lakers coach Luke Walton has been accused of sexual assault, according to court documents obtained by ABC7 on Monday.

Plaintiff and sports broadcaster Kelli Tennant submitted a complaint against Walton for damages including sexual battery, gender violence, violation of the Ralph Act and sexual assault.

Tennant accuses Walton of forcibly groping her and kissing her while he was working as the Golden State Warriors' assistant coach.

Court documents reveal Walton and Tennant were discussing her book, in which he wrote the foreword, when she says he pinned her to his hotel bed and kissed her. She claims he groped her breasts and groin area and continued despite her pleas to stop.

Walton's attorney Mark Baute released a statement saying, "The accuser is an opportunist, not a victim."

The statement read: "Luke Walton retained me to defend him against these baseless allegations. The accuser is an opportunist, not a victim, and her claim is not credible. We intend to prove this in a courtroom."

The Warriors put out this statement: "We became aware of the alleged incident and story this evening and are in the process of seeking more information. We'll have no further comment at this time."

Walton was the former head coach for the Los Angeles Lakers. He's now the head coach for the Sacramento Kings. The Kings issued a statement saying: "We are aware of the report and are gathering additional information. We have no further comment at this time."

The Lakers also issued a statement. The team said the alleged incident happened before he was coach for the team.

"This alleged incident took place before Luke Walton was the Head Coach of the Los Angeles Lakers. At no time before or during his employment here was this allegation reported to the Lakers. If it had been, we would have immediately commenced an investigation and notified the NBA. Since Luke Walton is now under contract to another team, we will have no further comment."

Fans are reeling from the news.