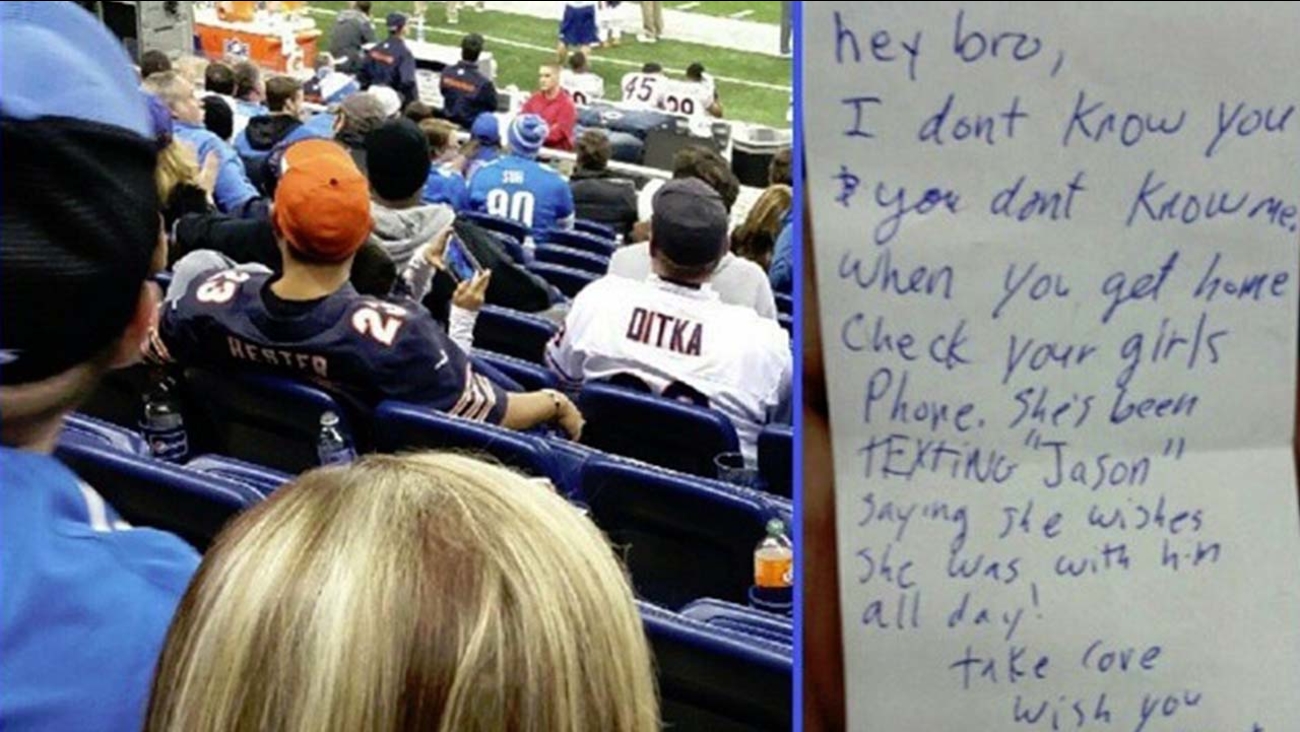 A story published to Reddit has caused much controversy over the web after a man posted a photo detailing a story in which he claims to have confronted a complete stranger about his pregnant wife cheating on him. The debate centers around whether or not the supposed good Samaritan has put the woman in danger of domestic abuse.

Reddit user CoolRunner posted a screenshot of a Facebook update to Reddit last week, detailing another man's encounter, known only as "Lye," at the Detroit Lions vs Chicago Bears football game on Thanksgiving Day. In the Facebook post, Lye claims that while trying to watch the game he couldn't help but notice the pregnant wife of a couple seated in front of him texting romantic messages to another man.

Taking it upon himself to warn the husband of his wife's alleged infidelity, Lye wrote the following message on a scrap of paper:

"I don't know you and you don't know me. When you get home check your girls phone. She's been texting "Jason" saying she wishes she was with him all day!

Take care. Wish you the best."

In the Facebook post around the photo, Lye says the woman appeared 'eight months pregnant' and texting the other man messages along the lines of "I wish I was with you all day" and "I will see you as soon as I'm done with him."

According to Lye's post, the woman kept hiding her phone whenever her husband put his arm around her or reached in to speak to her.

"So being the man that I am I couldn't help it...I had to write him a little note and on his way out after the game was done, I simply waited for him to exit and stopped him in front of his woman and handed him a piece of paper and said "I don't know you and you don't know me, read this when you get home, TRUST ME."

Lye said the man looked at him, confused, and said, "okay." Lye said he was unsure of what happened after that. Many Reddit users, however, imagine the worst.

Reddit users were engaged in heated debate about whether or not the Lye had any business writing the man without knowing more details, and has possibly put the woman in danger of a violent retaliation from the husband.

"He doesn't know what the boyfriend is like. He could be dangerous and abusive, and she could be too scared to leave him so she has a secret affair," wrote Reddit user Allan_Frankland.

There is also a question about the authenticity of the story, as the hashtag #ChiveOn was included at the bottom of the handwritten note.

"I think that whatever PR firm TheChive.com hired to stage and create this viral marketing campaign did an amazing job," wrote Reddit user mountainjourno.

What are your thoughts? Was this man acting in the right or wrong? Let us know in the comments below.