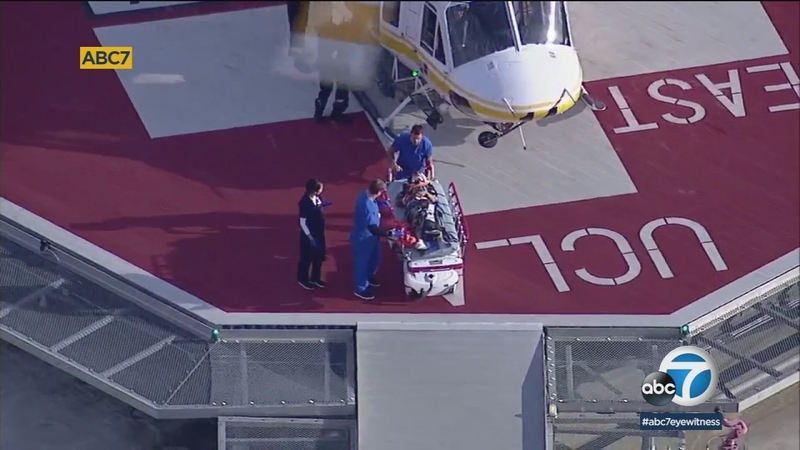 The deadly chain-reaction crash happened shortly after deputies called off the chase of the stolen vehicle, authorities said.

The sequence of events began shortly before 8 a.m. Wednesday when a deputy spotted a 2014 Mazda 6, which was reported stolen two days ago, while patrolling the east side of Zuma Beach, Sgt. Bob Boese of the Los Angeles County Sheriff's Department said at a news conference. The deputy made a U-turn, began following the vehicle and called for backup.

Deputies then conducted a traffic stop, during which a female passenger exited the vehicle and the 22-year-old male driver sped away at a high rate of speed, the LASD spokesman said. The woman was taken into custody.

A brief pursuit ensued, lasting between 10 to 20 seconds before a sheriff's supervisor called it off due to the suspect's speed and erratic driving.

"Moments later, the (driver), continuing at a high rate of speed on PCH, lost control of the vehicle at 27500 block ... and unfortunately hit a pedestrian," Boese said.

The 28-year-old victim was killed instantly. Authorities say the man was simply pulling out trash cans onto PCH when he was hit.

The suspect then hit three parked cars, leading to another collision involving a truck that was traveling on PCH. No one inside the truck was hurt in the latter crash.

The pileup resulted in the suspect becoming trapped inside the stolen vehicle, which erupted in flames. The deputies who had been involved in the aborted chase arrived at the scene and rescued the man from the burning vehicle. Meanwhile, L.A. County firefighters quickly extinguished the fire.

The injured suspect was taken into custody and transported to a hospital. His condition was unknown. He was identified by Boese only as having "various residential addresses out of the Santa Monica and Venice Beach area." The deputies who rescued him also had to be treated for smoke inhalation.