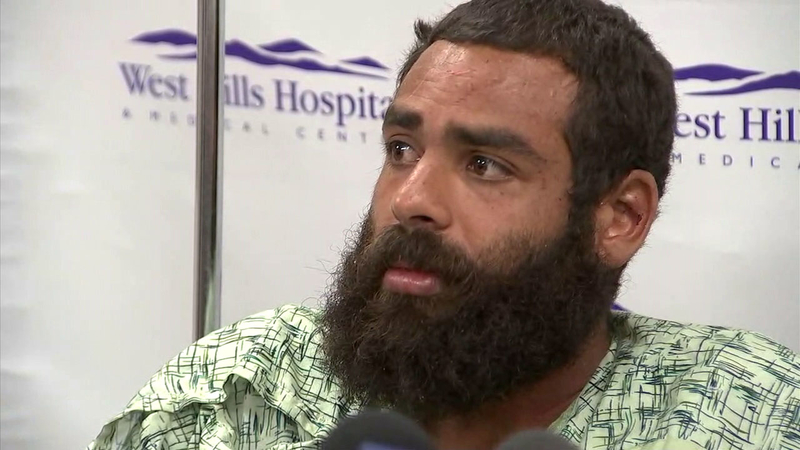 Marcelo Santos went missing Sunday while hiking in the area. He suffered a severe knee injury and was separated from his backpack, lights and cellphone. Despite not having food or water for four days, he never gave up, authorities said.

"I freaked out in the darkness, lost my bag, didn't have any survival gear on me, no flashlights, no sweater, no lighter, and I just had to trek on down the mountain until I found some water. I was drinking out of little streams when I could," Santos recounted.

As he held back tears during a press conference alongside doctors and rescuers, Santos thanked everyone for their efforts in their search to find him.

"First of all, I want to thank God and all my rescuers that made it to the scene and first responders. There were a lot of volunteers out there, a lot of people that took time off of their job and risked their health and their safety to find me," he said. "I really, really appreciate that."

A hiker speaks at a press conference to reporters about surviving four days without food or water in Malibu Creek State Park.

At about 4 p.m. Monday, Los Angeles County sheriff's officials from the Lost Hills Sheriff's Station were notified of the hiker being missing. They were able to ping Santos' cellphone location, which is where they began their search.

Santos said he heard the helicopters and other rescue crews searching for him but couldn't locate them. LASD officials said large trees and bushes in the area made it difficult to spot Santos during the three-day search.

"The area is heavily canopied by trees and bushes, so even if you have a helicopter right over your head, and you're waving to that helicopter and screaming, they're not going to see you," an LASD official said.

Santos said the trouble began the very first night -- on Sunday -- when he slipped and fell down a large rock face, severely injuring his leg and becoming separated from his bag.

As the days went on, Santos said he tried to stay positive and focused. He slept in caves and kept warm with ferns at night, while occasionally drinking from stream water when he found it.

"I had a couple moments where I doubted it, but I said, you know, 'What good is it laying here dying, man, if I could just keep walking a little bit more' and, you know, every hundred yards, a little bit further down to civilization, and I finally saw that cabin, and I was like, 'Oh man,' my heart just dropped," he said.

The search, which involved about 100 rescue personnel, was conducted until about 6 p.m. Wednesday, when Santos, while injured, was able to crawl his way down to a Salvation Army Camp, just south of Malibu Creek State Park.

"First thing I saw was a bathroom, turned the faucet on, started guzzling water," Santos said while wearing a big smile.

Santos is expected to make a full recovery and said he's grateful to those who helped rescue him.