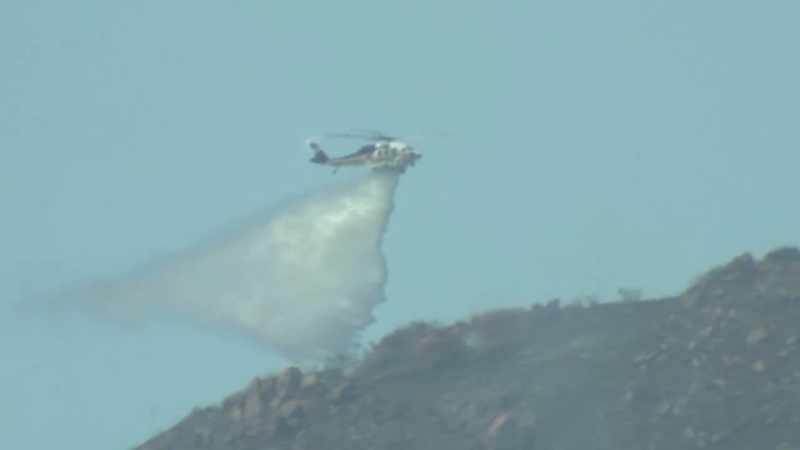 MALIBU, Calif. (KABC) -- A stubborn brush fire erupted along a steep hillside in Malibu on Friday.

The blaze broke out near Pacific Coast Highway and Sweetwater Canyon Road around 11:30 a.m. By around 1:20 p.m., the second-alarm fire charred around 40 acres and was 20% contained, the Los Angeles County Fire Department said.

#Brushfire in #Malibu which started on Sweetwater Canyon Road. Here’s the view from #PCH @ABC7 pic.twitter.com/hJBEoIpTCi

Flames were creeping uphill amid a light wind blowing from the southwest, but it was under control by 3 p.m., according to authorities.

"It was only about an hour that it was really scary....everybody's a little on edge but it was amazing how quickly the fire department got on top of it and knocked it down," said Jimmy Chavez, Duke's Restaurant manager.

Structures were not threatened.

The Los Angeles County Sheriff's Department's Lost Hills Station said on Twitter that Sweetwater Mesa Road was closed in the area due to the firefight. Firefighters were scheduled to be in place throughout the night to keep an eye on things.

#SweetwaterFire Firefighters continue the difficult work of shoring up and reinforcing containment lines in steep terrain. Cause investigators on scene. Mop operations will continue into the evening and @LACOFD personnel will remain on the scene throughout the night on fire watch pic.twitter.com/Iwfn0vPmzC