1 killed, 2 seriously injured in two-alarm house fire that spread to nearby brush in Malibu 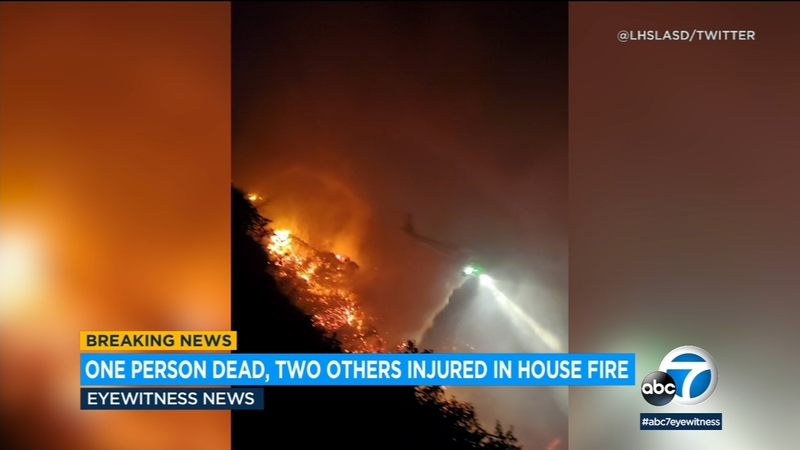 MALIBU, Calif. (KABC) -- A person was killed and two others were seriously injured in connection with a second-alarm fire Sunday morning in Malibu that started out as a house fire and spread to nearby brush, charring a little under four acres, a county fire department dispatcher said.

It was not known how the death occurred or the injured were tied to the blaze, according to a Los Angeles County Fire Department dispatcher.

The house fire was reported at 3:34 a.m. in the 2100 block of Rambla Pacifico, near Pacific Coast Highway, according to Los Angeles County Fire Department Dispatcher Nicole Larios.

By about 5:30 a.m. officials reported firefighters had stopped forward progress of the flames and had 20% surrounded by a line of cleared vegetation.

The blaze was at 100% containment by 5:49 a.m., according to a Los Angeles County Fire Department dispatcher.

The identity of the person who was killed was not immediately released, and the two people who were injured were hospitalized in unknown condition.

The flames spread to surrounding brush and a half acre grew to about 4 acres, Larios said. At the height of the fire, more than 200 firefighters were on scene.

The flames moved downhill, pushed by northeast winds of 10-15 mph and threatened some nearby structures, fire officials said.

"Not only did we have a well-involved house, but the brush fire that was spreading was impinging on two additional homes," said L.A. County Fire spokesperson Sean Ferguson. "Obviously, we're in significant fire danger weather, so we wanted to get a handle on it before it spread and became a bigger issue."

Residents were urged to prepare for potential evacuations that turned out not to be needed.

The relative humidity was about 15%, according to the National Weather Service and the winds were not likely to get stronger than 20 mph.