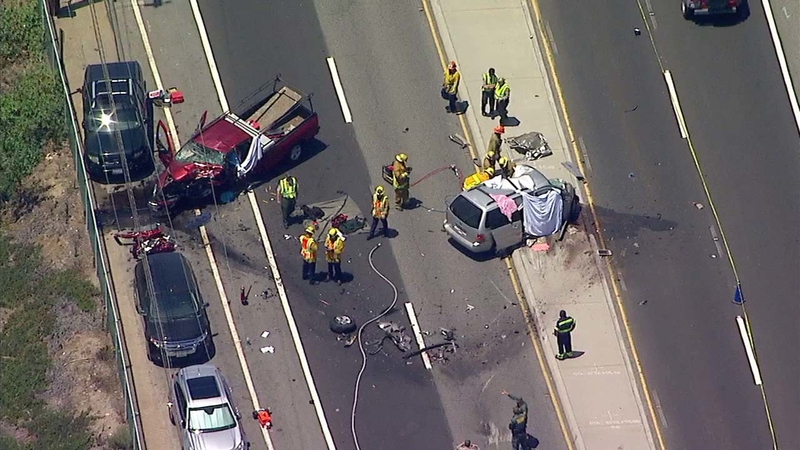 MALIBU, Calif. (KABC) -- The drivers of two cars died and a bicyclist was injured following a violent wreck that partially shut down busy Pacific Coast Highway in Malibu on Friday.

The two drivers, both described as male adults, died at the scene, Los Angeles County sheriff's officials said. The cyclist was transported via ambulance to an area hospital for treatment.

Fire officials said one other person suffered minor injuries. That person is in stable condition.

The identities of the deceased and injured were not immediately available. Speed and alcohol may have been factors in the crash, according to detectives.

The cars involved in the wreck were a gray Mercury minivan and a red Dodge Ram pickup truck. The driver of the minivan was headed west on Pacific Coast Highway and the red pickup truck was headed eastbound.

A witness said he heard the minivan crash through the barriers that separates east and westbound traffic.

"We all turned around and saw what looked like an explosion almost, just two cars colliding straight into each other," said witness Joe Rickbaugh.

According to sheriff's officials, a preliminary investigation at the scene suggests the driver of the minivan was going at a high rate of speed and attempted to pass another vehicle, losing control before going over the center divider and hitting the red truck.

Authorities said the bicyclist was struck by a wheel that came off the pickup truck.

Both directions of the highway were closed for some time and then reopened around 6:30 p.m.