Man allegedly kills his father, 2 others during murder spree in Del Rey, Lennox

KABC
LENNOX, Calif. (KABC) -- A 36-year-old man has been arrested for allegedly killing his own father in Del Rey and also fatally shooting two other men in Lennox, officials said.

It all started in Del Rey, where a suspect fatally shot a man and injured an older woman on Wagner Street near Stoner Avenue around 6 p.m. Sunday.

The suspect was later identified by sheriff's officials as 36-year-old Juan Saucedo. The man slain in Del Rey was Saucedo's father, according to Los Angeles police. The two had an argument prior to the shooting, LAPD said.

Eyewitness News has learned that Saucedo's father was related to an active LAPD employee.

Following the Del Rey shooting, Saucedo apparently traveled to Lennox by carjacking the driver of a Camaro. The driver remained in the car during the incident and was identified as Jesus Estevez Martinez, 27.

The sheriff's department said Saucedo was armed and drove to the 10100 block of Firmona Avenue in Lennox. At around 6:30 p.m., sheriff's homicide detectives receiving a call about a shooting in that area.

When authorities arrived, they found Martinez suffering from a gunshot wound to the upper torso. He was pronounced dead at the scene.

Upon investigation, detectives learned that Saucedo fled this location and ran to the 10600 block of Mansel Avenue, where he shot another man. That victim was transported to a local hospital, where he was pronounced dead. It was unclear if Saucedo knew that man.

Authorities said Saucedo then ran to the 10400 block of Mansel Avenue, where he attempted to carjack another driver. During this attempt, investigators said Saucedo shot the driver. That driver was transported to a local hospital, where he was listed in fair condition.

Deputies arrived at the scene and arrested Saucedo without incident. He was booked on suspicion of murder and was being held in lieu of $2 million.
Report a correction or typo
Related topics:
lennoxdel reylos angeleslos angeles countyarrestmurderfatal shootinglos angeles county sheriff's departmentlapdgun violenceshooting
Copyright © 2020 KABC-TV. All Rights Reserved.
RELATED 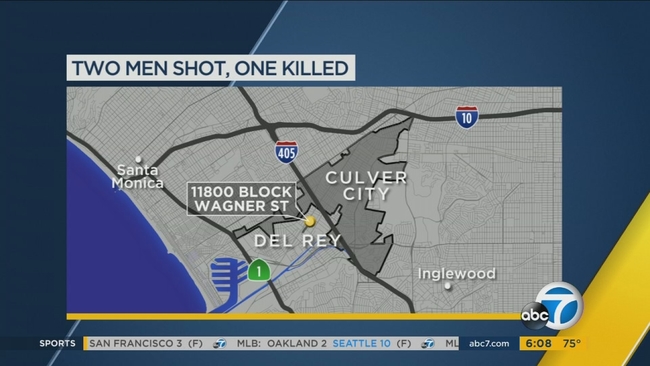