Police say the woman tried to intervene but the suspect poured gasoline on her before he took off. He's now on the run.
KABC
By Jessica De Nova 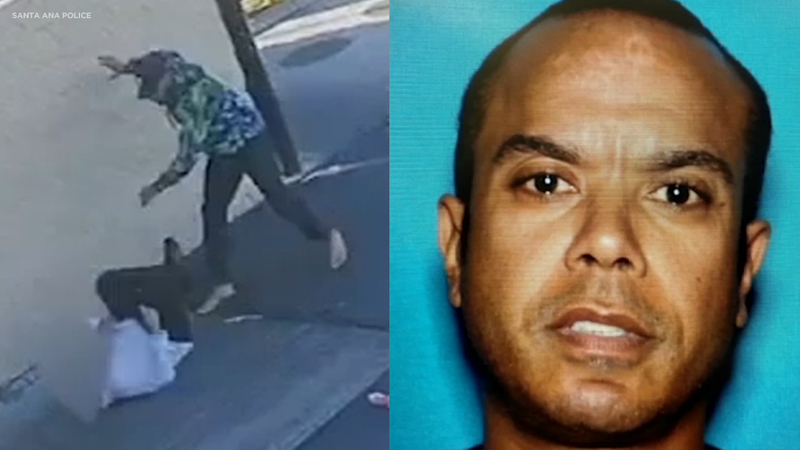 SANTA ANA, Calif. (KABC) -- Police are looking for a man caught on surveillance video attacking a man for his cell phone and pouring gasoline on a stranger before taking off.

The incident happened at around 10 a.m. at a shopping center near South Coast Plaza on Jan 2. The suspect was identified by the Santa Ana Police Department as 51-year-old Damon Domici.

Video shows him walking around barefoot wearing a hat before the incident occurs.

"The suspect parked his car behind the Jack in the Box, and the victim, the male victim, was standing there on his phone, and that's when [Domici] approached him and assaulted him," said Sgt. Maria Lopez with Santa Ana Police.

She said when Domici approached the victim, he was aiming for his cell phone.

Eyewitness News blurred the victims' faces in the video to protect their identities. At one point, a young boy is seen approaching.

"The suspect actually had his child with him," said Lopez. "So what you see in the picture, there to the left in the video, is his child."

After the victim finally breaks free and Domici appears to walk away, a woman - the victim's co-worker - steps in. That's when Domici is seen heading back to his black SUV.

"The vehicle that you do see there, obviously, is associated to him," said Lopez. "But we do believe that he's a transient and he could be in any part, really, of Orange County. I believe he's had some connection with Irvine, Costa Mesa, maybe even L.A. County as well."

In the video, Domici is seen returning with a can of gasoline and pours it on the co-worker, who fights back. Police say both victims are recovering from minor injuries, but believe they're lucky it wasn't much worse.

They say it's usually safer to let go of material things in these type of incidents.

"It was very fortunate, in this case, but we just never know if the suspects could be potentially armed or how quickly things can escalate," Lopez said.

During a briefing on Wednesday, Lopez said Domici's son is safe and with his mother.

Anyone with information on this incident or Domici is asked to contact Santa Ana Police at 714-245-8665.