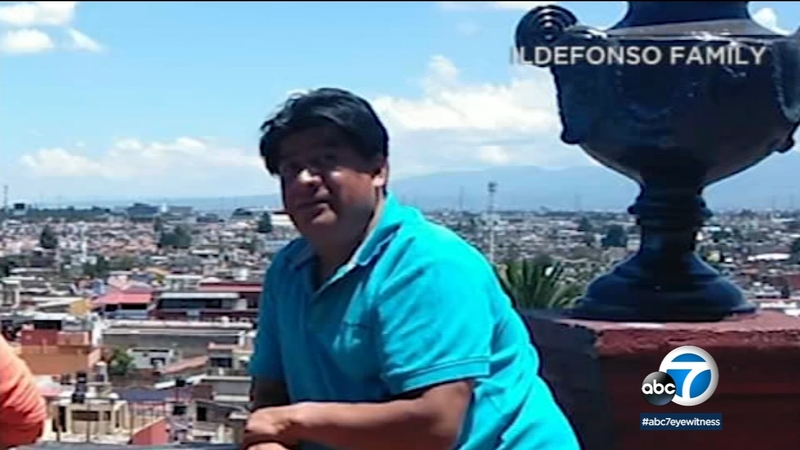 VENICE, LOS ANGELES (KABC) -- A family is searching for answers after a man was hit by a vehicle on his way to work at a Whole Foods in Venice and later died.

Timoteo Martinez Ildefonso, 43, died Friday after being hit by a pickup truck that was making a left-hand turn near the intersection of Lincoln Boulevard and Rose Avenue around 9:30 p.m., according to Los Angeles police.

Ildefonso was struck as he was crossing Lincoln Boulevard on his way back to work at Whole Foods.

"I just keep wondering if somebody called an ambulance right away, would he have been able to pull through," Martha Eve Jimenez, Ildefonso's wife, said.

Investigators say that according to witnesses, the driver stopped and tried to talk to Ildefonso as he returned to work.

"His head was bloody, and a coworker told me he brought him ice and a supervisor said, 'Well, OK, drive him home,'" Jimenez said.

Ildefonso was apparently unaware he had been gravely injured. His spleen was ruptured by the impact.

Jimenez says she can't understand why the driver, coworkers or her husband didn't call an ambulance or police after the accident.

"I think he was maybe in shock, I mean, he had hit his head really hard, so I don't know what his thinking was like at that point," Jimenez said.

The LAPD says the case isn't a hit-and-run since the driver of the red truck did stop, but authorities are trying to track him down to find out exactly what happened.