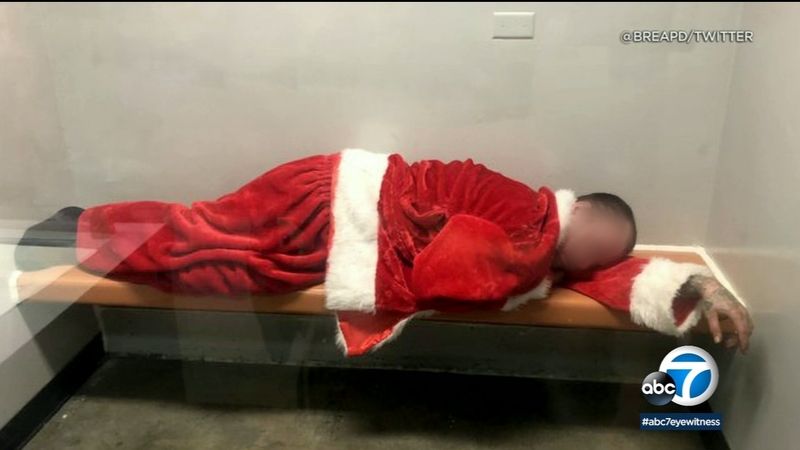 A man wearing a Santa Claus suit was arrested on suspicion of burglary after he was found inside a car that was not his in Brea.

BREA, Calif. (KABC) -- A man wearing a Santa Claus suit was arrested on suspicion of burglary after he was found inside a car that was not his in Brea.

Police responded to a call of a suspiciously occupied vehicle at Balsa Avenue near State College Boulevard early Tuesday morning. When they arrived, the suspect was found inside a car and appeared to be intoxicated, according to the Brea Police Department.

Upon further investigation, authorities determined that he also did not own the Santa suit. Police believe the man had stolen the suit from a storage shed of a nearby church.

The man was not arrested for driving under the influence since he was not operating the vehicle.

Police posted a picture of the man on Twitter in a holding cell with the following text:

I was drunk and made some poor choices.
I know it's only October. And it's hot. Too hot for this suit.
But I was drunk. Poor choices.
Sincerely, Drunk Santa Suit Criminal"
Report a correction or typo
Related topics:
breaorange countyburglaryarresttheftsanta claus
Copyright © 2021 KABC-TV. All Rights Reserved.
TOP STORIES
2 men dead after fire at Canoga Park marijuana grow operation
Record number of container ships waiting to enter SoCal ports
Hemet police officer punches suspect in confrontation seen on video
California now only state at 'moderate' COVID transmission level
LA County urges public to avoid high-risk Halloween activities
No one killed when jet with 21 on board crashes west of Houston, Texas
No charges will be filed against former UFC champ Chuck Liddell
Show More
CA vacation home renters targeted with threat, vandalism
US expected to authorize mix-and-match COVID booster shots
Gabby Petito's parents speak out about Brian Laundrie
Down 2-0, Dodgers have Braves where they want them at home
Women, minority firefighters accuse LAFD of sexism and racism
More TOP STORIES News