Man jumps to his death at Hollywood & Highland center, hours after authorities arrive at scene 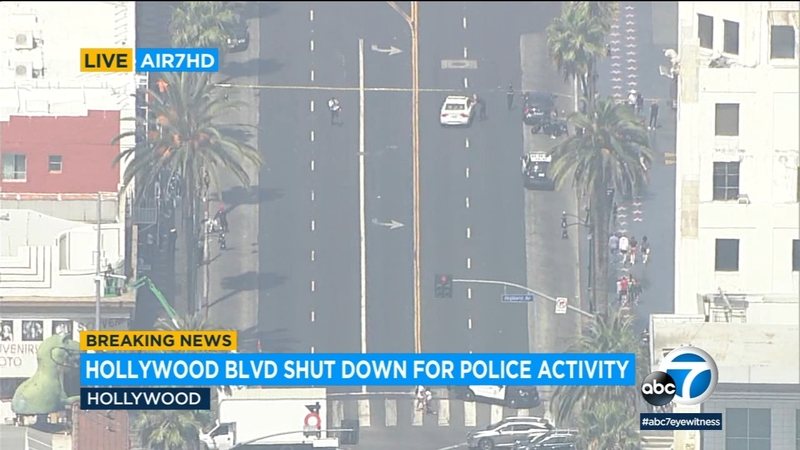 HOLLYWOOD, LOS ANGELES (KABC) -- A man jumped to his death from a balcony at the Hollywood & Highland shopping and entertainment center on Friday morning, hours after Los Angeles firefighters and police officers arrived at the scene, authorities said.

Video from AIR7 HD appeared to show first responders talking to the man as he sat along a ledge high above the front entrance of the Dolby Theatre, which faces Hollywood Boulevard. The busy street was closed to all traffic shortly after 10 a.m. as the tense situation unfolded.

A large white and yellow air cushion was set up on the ground some 60 feet below the area where the man was located.

Mental Health Action Day is a day to take the first action to get mental health support, whether for yourself, your loved ones or for all. Dr. Jonathan Sherin, director of the L.A. County Department of Mental Health, sat down with Eyewitness News to discuss.

Firefighters "set up a two-line rope system and are ready with harnesses to secure mental health professionals for safety approaching patient to help address an apparent behavioral emergency," the LAFD said in a statement. "This expected to be an extended operation."

About 1:30 p.m., the Los Angeles Police Department confirmed that the man was pronounced dead at the scene after jumping.

If you or someone you know is in emotional distress or considering suicide, you can call the National Suicide Prevention Lifeline at 1-800-273-TALK (8255).