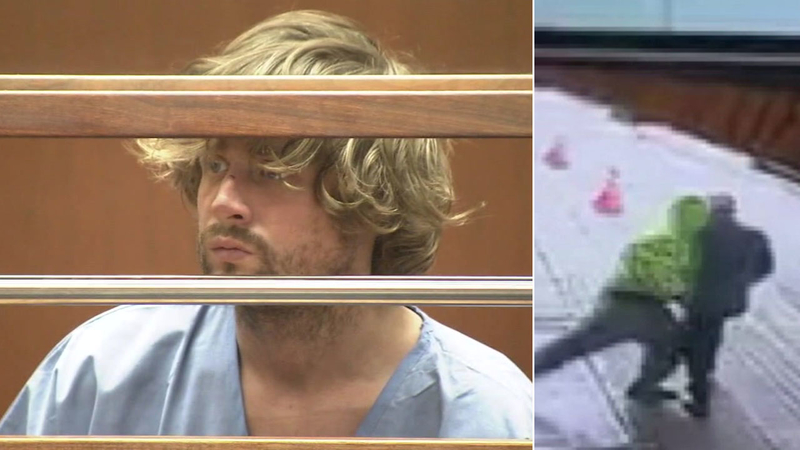 Suspect accused of pushing man under truck in DTLA charged

DOWNTOWN LOS ANGELES (KABC) -- A suspect accused in a brazen attack caught on video in which a man was pushed under the wheels of a truck in downtown Los Angeles was charged Friday.

Garrett Joseph Boldt, 41, was charged with one felony count of premeditated attempted murder, three felony counts of assault by means of force likely to produce great bodily injury and one misdemeanor count of petty theft.

The charges include an allegation that Boldt personally inflicted great bodily injury.

Boldt is accused of tackling a woman to the ground on Tuesday at West 7th and Hill streets. Then on Wednesday, he was sitting on a bench on West 6th Street near South Broadway when he stood up and is suspected of pushing a passing pedestrian into the street.

Firefighters saw the video run on ABC7 and recognized the suspect - seen in the video wearing a lime-green hoodie - less than an hour later. They spotted him near Hill and 3rd streets in downtown and called 911.

Boldt is also accused of punching a woman later that afternoon at a bus stop at West 1st and South Hill streets. Authorities arrested him nearby not long after. That attack also appeared to be random and unprovoked, according to prosecutors.

As the victim fell under the truck's front wheels, the suspect leaned down and appeared to grab something. He then put his hands in his pockets and casually walked away.

Authorities said the victim also dropped a bracelet he had been carrying when he was pushed, accusing Boldt of taking it.

If convicted as charged, Boldt faces a maximum of life in prison.

During an arraignment hearing Friday afternoon, he pleaded not guilty and bail was set at $1.09 million. His next court date is scheduled for Dec. 20.