A man was shot and killed in a confrontation with Los Angeles County sheriff's deputies in South LA Monday afternoon.
KABC
By Amy Powell, Marc Cota-Robles and ABC7.com staff 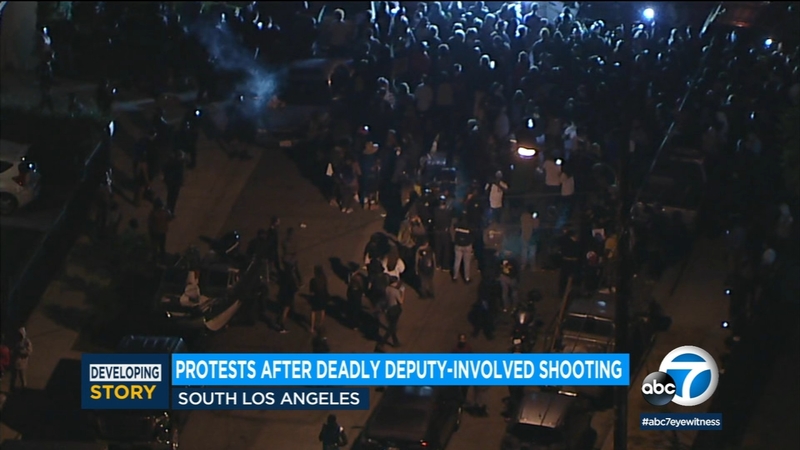 The incident happened just after 3 p.m. in the area of Budlong Avenue and 109th Place.

It began when deputies who were driving in the area saw a man riding a bicycle and decided to pull him over for a vehicle code violation in the area of 110th and Budlong.

The man dropped the bike and ran off. Deputies caught up to him on 109th. At that point, they say, the man fought with the deputies and punched one of them in the face.

A man was shot and killed in a confrontation with Los Angeles County sheriff's deputies in South LA Monday afternoon.

He had been carrying some clothing in his hands and he dropped it to the ground. The deputies spotted a handgun among the items of clothing he had dropped. At that point was when the shooting occurred.

It was not immediately clear whether the man had been reaching for the gun. Investigators say they have to conduct interviews with the deputies to clarify the incident.

"Our suspect was holding some items of clothing in his hands, punched one of the officers in the face and then dropped the items in his hands," Dean said. "The deputies noticed that inside the clothing items he dropped was a black semiautomatic handgun. At which time a deputy-involved shooting occurred."

The man was struck several times by the gunfire. He died at the scene.

The semiautomatic handgun was recovered at the scene.

A woman who said she was his aunt said Dijon's mother had died recently. She also said her nephew had ADHD.

"For the last few weeks I've been telling him to calm down," she said.

Dozens of protesters and neighborhood residents gathered in the area near the shooting Monday night. Black Lives Matter was asking supporters to show up and protest the law enforcement action.

The Black Lives Matter LA Twitter account was calling out for "all hands on deck" support, asking people to come to the scene.

Los Angeles County Sheriffs killed a Black man...Dijon...on 109th and Budlong and left his body facedown in the dirt.
We need all hands on deck.
Please get here ASAP!

Unlike the LAPD, Los Angeles County sheriff's deputies are not equipped with body cameras at this time. The department is expected to start deploying body cameras later this fall.

All deputy-involved shootings that result in a death are investigated to determine if the shooting was legally justified. Investigating agencies include the District Attorney's Office, the coroner's office and the sheriff's own Internal Affairs Bureau and inspector general.