Man who jumped from overpass after OC chase is rape suspect, LASD says 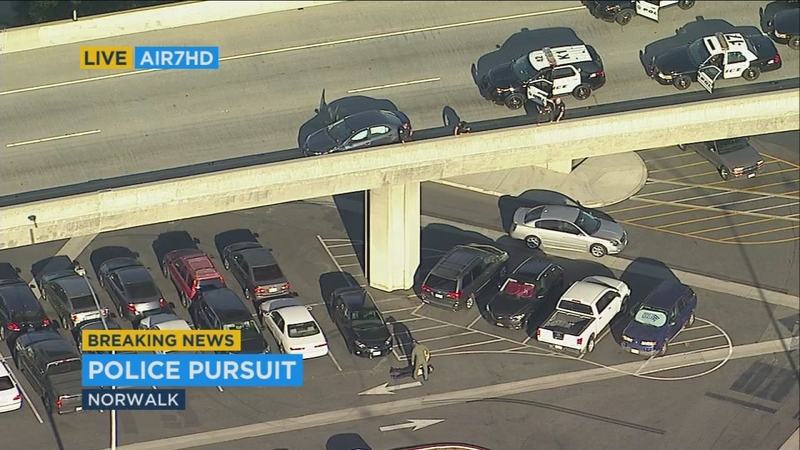 NORWALK, Calif. (KABC) -- A suspect with children in his vehicle who was being chased by police on the 605 Freeway in Orange County jumped from a freeway overpass, injuring himself before authorities took him into custody Thursday.

The man, who had his children in the vehicle at the time, is a suspect in a rape that was reported on Wednesday, according to the Los Angeles County Sheriff's Department.

Authorities said a woman filed a report at the Lakewood Sheriff's Station alleging that she was raped and assaulted by the suspect, triggering an investigation by the LASD.

Officers were attempting to make contact with the man in Huntington Beach when he got into his car with his two children and fled, according to the sheriff's department.

The chase transitioned from the 405 to the 605 before it ended in a crash on a freeway overpass in the Norwalk area. Several Huntington Beach police units were in pursuit.

The man got out of his car and ran before jumping from the overpass, authorities said.
The suspect landed in a parking lot below the overpass, where he was taken into custody. The man sustained serious injuries from the fall, according to authorities. He was transported to a local hospital.

According to the Huntington Beach Police Department, the chase began after a call from a woman who said the suspect had their children in his car. The woman was concerned about the children being in the vehicle with him after the couple had a domestic incident that took place in L.A. County.

The two children who were in the vehicle sustained minor injuries from the crash and were also taken to a local hospital for treatment.

Charges are pending against the suspect and the investigation is ongoing.