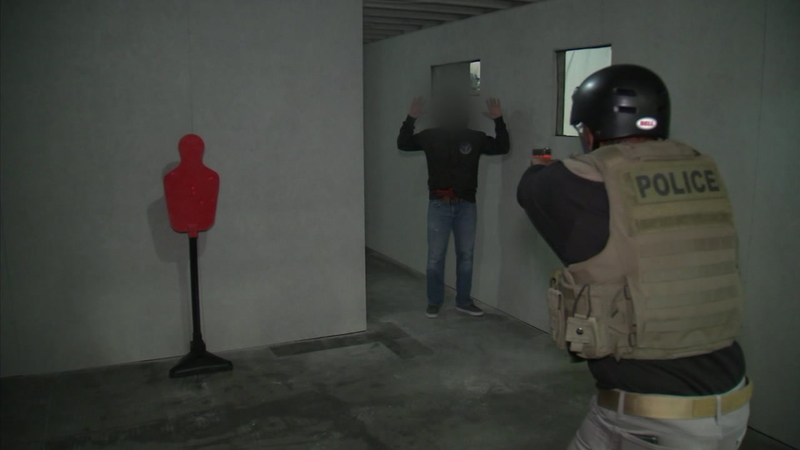 Marc Brown trains like a DEA agent during simulation

LOS ANGELES (KABC) -- Much of the war on drugs is fought house by house and it's dangerous work that requires a lot of training.

ABC7 anchor Marc Brown went along with some DEA agents practicing in their brand new 4,000-square-foot facility that simulates a home, or other building where they might serve a search warrant. It has moveable walls and an open ceiling for observations from above.

A line of agents - called a stack - prepared to enter the building.

"I know if I go in with a partner, I know that my partner is going to do exactly what they're supposed to do to protect me and likewise, I know that I'm going to make sure that nothing happens to them," agent Jeff Winkler said.

They communicate with a tap on the shoulder, armed with automatic weapons and tactical gear. They are a fearsome sight. Most suspects, when confronted with this sort of firepower, give up without a fight.

"If we can scare somebody out of hurting us or anybody else, then we're all for it," Winkler said.

It doesn't always work. In December 2015 in Burlington, Vermont, DEA agents and local police served a federal search warrant on a man suspect of distributing cocaine.

Officers shot and killed the suspect, 56-year-old Kenneth Stevens, when he pointed a rifle at them.

The agents in the simulation are training for such a scenario. They practice going down narrow hallways, climbing stairwells and clearing rooms. Then they load their pistols with non-lethal training ammunition and throw a fellow agent in to pose as a bad guy. The simulation gets very real, very fast.

"There's not a lot of physical exertion involved in the training, but I'm sweating," he said. "I'm sweating from the mental energy I'm expending, trying not to get shot, trying not to let my partners down and trying to get it right."

During his run, his job was to open the door and clear the room. If there's a threat in there, he had less than a second to decide whether or not to fire his weapon.

After the simulation, agents received a critique - including Brown.

"You did good. You didn't shoot the guy, right? Maintain cover on him and then cuff him. Perfect. That's how we're supposed to do it," one agent said.

But bad guys aren't the only hazards. The DEA is targeting opiates, which includes the most deadly opiate of all - fentanyl. It's 10 times more potent than heroin and is becoming a favorite of drug traffickers. It's a potentially lethal hazard for Drug Enforcement Agents.

This is why agents carry Narcan. It's a medication that can save your life in the event of an opiate overdose.

To these men, the war on drugs is a series of battles. Each time they win, they get dangerous drugs off the street as well as dangerous drug dealers out of circulation. They said they're indirectly saving lives and they train this way to make sure they make it home alive, too.
Report a correction or typo
Related topics:
los angelesillegal drugssafetyexclusivetraining tipsdrugs
Copyright © 2021 KABC-TV. All Rights Reserved.
More Videos
From CNN Newsource affiliates
TOP STORIES