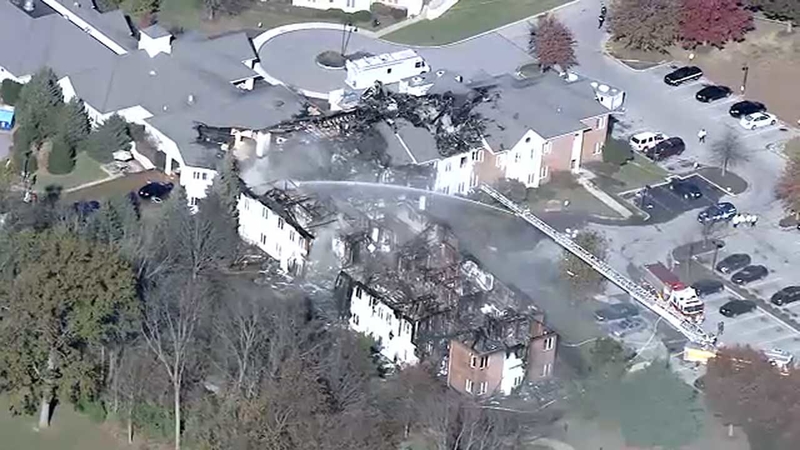 WEST CHESTER, Pa. -- At least 20 people have been injured in a massive, multi-alarm fire at a senior living community in West Chester, Pennsylvania.

Numerous residents have been displaced.

At least 20 hurt in West Chester fire: Katherine Scott and Jeannette Reyes report during Action News at 6:30 a.m. on November 17, 2017.

Fire officials have refused to say if there were any fatalities, and District Attorney Tom Hogan said it could likely be Saturday before crews are able to get inside.

Investigators from the ATF will be involved due to the size of the fire.

Chopper 6 was over the aftermath of a massive inferno at the Barclay Friends Senior Living Community in West Chester, Pa.

The blaze was reported at 10:46 p.m. Thursday at the Barclay Friends Senior Living Community on the 700 block of North Franklin Street.

Watch video from Chopper 6 over the fire at the Barclay Friends Senior Living Community.

The fire quickly spread to multiple buildings and flames could be seen shooting from the rooves and windows of the structures.

Residents were forced to evacuate outside into the cold, with temperatures overnight hovering in the low 40s.

Watch Action Cam video from the scene of a major fire at the Barclay Friends Senior Living Community.

Officials said the inferno went to five alarms before it was declared under control at 1:22 a.m. Friday.

Video showed dozens of residents on the lawn or along the street, wrapped in blankets. Many of them had been pushed in wheelchairs or rolled on beds to safety.

At a news conference shortly before 6:30 a.m. Friday, officials declined to say how many residents were injured, or if there were any fatalities.

But earlier in the morning, Chester County emergency officials said at least 20 people were taken to area hospitals for treatment.

Watch Action Cam video of ambulances arriving at Paoli Hospital after a major fire at at West Chester senior community.

There was no immediate word on the conditions of the injured.

This is Mary Meakim on her 101st bday this past weekend. She lived in West Chester senior living community that went up in flames. Family was worried sick after they didn’t hear from her. later found she was safely evacuated. @6abc pic.twitter.com/bTTzrPMsDv

A spokeswoman for Main Line Health said one of its hospitals also was prepared to provide shelter to some additional residents of the senior living community.

According to its website, Barclay Friends offers various levels of care including memory care, skilled nursing, and post-acute rehab.

Early Friday morning, the local chapter of the American Red Cross said on Twitter that it had multiple teams on the scene and that it was working with county officials and facility staff to assist displaced residents.

A cause of the fire remained under investigation.

Some residents being held at West Chester University. But loved ones were told *not to go there as it would add more traffic, confusion etc. To go home and wait for phone call. Could be 3-6 hours before they get an update. @6abc