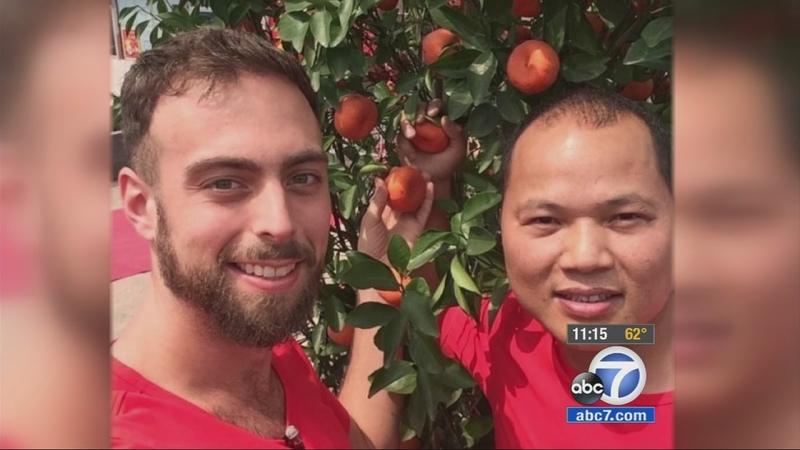 With the help of social media, a stolen cell phone brought two people from opposite sides of the world together and turned them into the best of friends.

Last year, Buzzfeed writer Matt Stopera had his phone stolen from a New York bar. Months later, strange photos of a man and his oranges started popping up on his replacement iPhone through his iCloud photo stream.

Stopera posted a story about the mystery man that eventually went viral in China. About 20 million people saw the story in less than 24 hours, with many becoming obsessesed with finding the man they nicknamed Brother Orange.

Brother Orange is eventually found and the two hatch a plan to meet in China.

"I literally can't even believe we're leaving tomorrow. I kind of have no idea what's going to happen," Stopera says in a trailer for the Buzzfeed documentary based on the adventure.

Brother Orange surprises Stopera at the airport. A bigger surprise? All the media attention.

In his latest Buzzfeed article, Stopera recounts the journey and his newfound celebrity in China.

Everywhere the two go, they're swarmed by cameras. They hold a press conference, pose with babies and endorse products.

All the while, Brother Orange makes Stopera feel like part of his family.

"We've developed this language with how we communicate, because we can't speak a word with each other," he says in the trailer.

Their bromance is cemented with mud baths. They wear matching shirts! Pose like a couple! And even throw down at a karaoke bar.

Stopera says he develops a real love for this man. When it is time to say goodbye after more than a week, the bond is obvious.

"If you said at the beginning of this that I would be crying at the end of this, I would think you were insane," Stopera says in the trailer.

And the story continues. Brother Orange is being invited to the U.S.