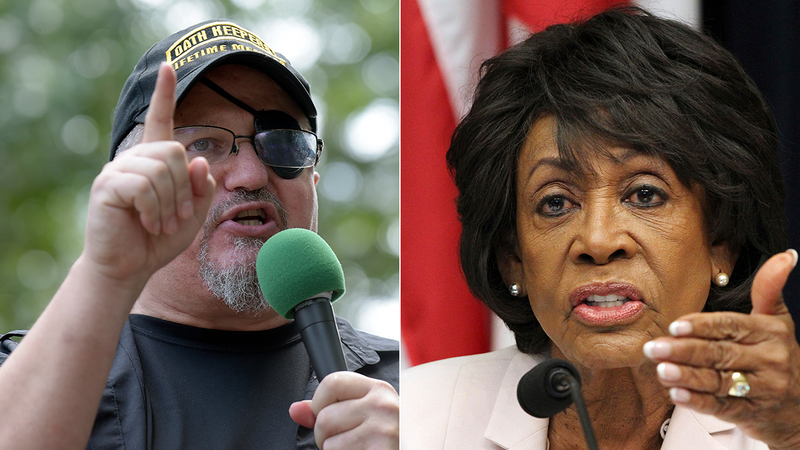 LOS ANGELES (KABC) -- A militia group on Thursday called off a planned protest outside the South Los Angeles office of Rep. Maxine Waters.

Supporters of the 43rd District congresswoman nevertheless staged a counter-protest despite her warning to "not be baited into confronting the Oath Keepers."

Just after 11 a.m., a small group of pro-Waters demonstrators was gathered on a corner outside her office as a half dozen LAPD officers stood across the street. The police were expected to set up crowd barriers shortly afterward.

According to the Oath Keepers website, members of the militia were scheduled to arrive at the scene at 1 p.m. They were protesting Waters recent statements encouraging members of the public to confront members of the Trump administration wherever they might encounter them.

"This is both a protest against Maxine Waters' incitement of terrorism, and a stand FOR ICE and the Border Patrol, as they enforce the perfectly constitutional immigration and naturalization laws of this nation," said statement published Tuesday on the website. "We expect this to be an ongoing protest for an indefinite time."

But just around the time the protest was expected to start, a Los Angeles Police Department spokesperson said the agency was notified by the group that its protest was canceled.

Meanwhile, the United Union of Roofers, Waterproofers, and Allied Workers previously said it would lead "a coalition of community organizations" in a counter-protest at the location.

Waters herself released a statement that discouraged her supporters from confronting the militia, which bills itself as a non-partisan association of current and former military personnel, police officer and first responders.

"The Oath Keepers would like nothing more than to inflame racial tensions and create an explosive conflict in our community," Waters wrote. "In order to ensure the peace and security of our community, it is best and preferable if no other demonstrations are scheduled."

The counter protest went on despite the absence of the Oath Keepers. At one point, a pickup truck drove by and the counter-protesters got into a brief confrontation with the men inside, though it wasn't clear they had any connection to the militia group. The demonstrators pulled an American flag from the truck and burned it on the ground, dancing around and chanting.
Report a correction or typo
Related topics:
politicslos angeleslos angeles countysafetyprotestcongresspresident donald trump
Copyright © 2022 KABC Television, LLC. All rights reserved.
TOP STORIES
Official admits police made 'wrong decision' in TX shooting
27-year-old arrested for murder after man killed inside Downey home
Suspect shot, killed by Ontario police after chase ends in crash
Uvalde school police chief faulted in shooting response
CA 'red flag' law can temporarily seize guns if someone makes threat
Parole recommended for Manson follower Patricia Krenwinkel
'All of Us:' API group recruiting participants for life-changing study
Show More
LA Archbishop José Gomez tests positive for COVID
'Top Gun' sequel introduces new pilots, pays homage to 1986 film
Garden Grove Strawberry Festival returns after 2-year hiatus
Lakers hire Darvin Ham as head coach, ESPN reports
Former Uvalde school teacher grieves for her mentor, students killed
More TOP STORIES News