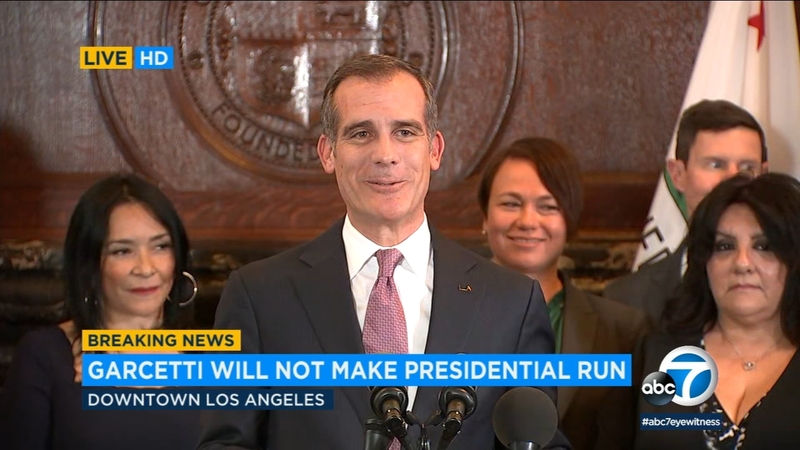 LOS ANGELES (KABC) -- Mayor Eric Garcetti announced Tuesday he is not running for president in 2020.

At a City Hall news conference, Garcetti said he wants to continue to focus on Los Angeles issues.

"I realize that this is what I am meant to do, this is where I want to be," Garcetti said. "And this is a place where we have so much exciting work to finish."

The 47-year-old mayor had toyed with the idea of launching a 2020 campaign, and has made political visits to key states such as Iowa and South Carolina.

Mayor Eric Garcetti announced Tuesday he is not running for president in 2020.

He spent the early part of January involved in helping mediate the Los Angeles teachers strike, but once that was resolved, he was expected to turn his attention to his political future.

The Democratic field is already starting to get crowded. Among candidates who have announced or are considering a run are California Sen. Kamala Harris, Sen. Elizabeth Warren of Massachusetts and former Vice President Joe Biden.

RELATED: Who's running for president in 2020? List of possible Democratic candidates

Garcetti said he feels secure in the future and the ability for Democrats to "take back" the country in 2020 as he watches the field of candidates grow. Many of them, he said, are people he knows and has faith in.

"They can count on me to be with them every step of that fight to take our country back."

Garcetti said he is proud of the things he has accomplished in LA and wants to continue to work on them. As examples, he cited reducing crime, winning bid for the Olympics and tripling the number of jobs for youths.

"The two things I love the most, my family and my city, are right here in LA," Garcetti said.

Garcetti also took a few swipes at the current occupant of the White House.

When asked if he thinks a third-party candidate businessman, like former Starbucks CEO Howard Schultz, without political experience should enter the race, he said individuals should run for other offices first to get the experience.

"President is not a starter job in politics," Garcetti said. "If we need evidence of that just go to 1600 Pennsylvania Ave.

Whoever holds the office, he said, needs to learn the rules and basics of governing first.