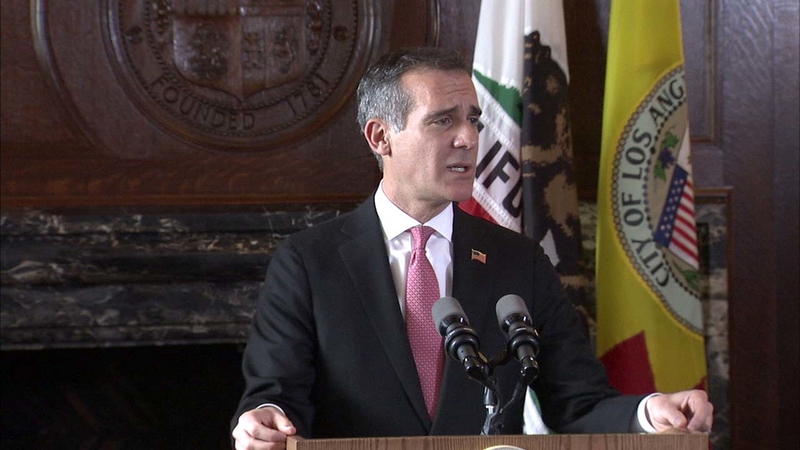 LOS ANGELES (KABC) -- As anger grows over what Angelenos say is a hit-and-run epidemic, Mayor Eric Garcetti's proposed $9.9 billion budget will pour more funds than ever into making the city's streets safer -- $41 million for sidewalk repairs, $73 million for street reconstruction and $90 million for overall safety for all our streets - not just those in certain neighborhoods.

"Instead of just fixing whatever, first come first serve, we want to go to those places that we've seen fatalities or bad accidents before. We're following the numbers. In the past, it was basically a political undertaking before, who had the political juice and who fought for it," said Garcetti.

The mayor's Vision Zero program aims to eliminate traffic fatalities by 2025, but pedestrian deaths have gone up 82 percent since the city launched the program two years ago. Garcetti misspoke on Tuesday when he said he would triple the budget for Vision Zero, clarifying Thursday that it will go up by nearly $9 million to $37.8 million total.

"We're seeing an increase in people walking. More people want to get out and walk to where they're going, but our streets are not designed for them to walk and we need Vision Zero projects to create environments that are pedestrian friendly," said Emilia Crotty with the non-profit Los Angeles Walks.

The budget will be paid for in part by expected revenue from marijuana sales, Airbnb, and the state gas tax. Another major focus of the budget is $430 million to address the homeless crisis.

MORE: Mayor Garcetti declares, "We are here to end homelessness"

Los Angeles Mayor Eric Garcetti declared, "we are here to end homelessness" during his State of the City address Monday.

"This year's budget also funds the creation of new teams dedicated exclusively to doing outreach and cleanup in the streets where encampments once stood or stand today," said Garcetti.