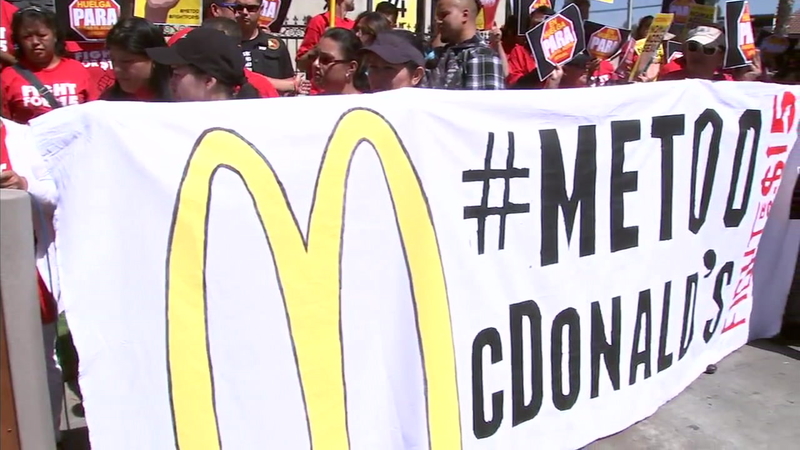 SOUTH LOS ANGELES (KABC) -- Some McDonald's employees in Los Angeles on Tuesday participated in a 10-city strike aimed at confronting what they say is the company's failure to respond to numerous incidents of groping, lewd comments and unwanted propositions for sex.

Organizers of the noon walkout say the striking workers were cooks and cashiers. They demanded that the company form a committee to address sexual harassment.

The proposed committee -- comprised of employees, representatives from corporate and franchise stores, and leaders of national women's groups -- "would chart a path forward to make sure nobody who works for McDonald's faces sexual harassment on the job," according to strike organizers.

In a statement, McDonald's Corp. spokesperson Terri Hickey said the fast-food company is and has been "committed to a culture that fosters the respectful treatment of everyone."

"There is no place for harassment and discrimination of any kind in our workplace," the statement continued. "McDonald's Corporation takes allegations of sexual harassment very seriously and are confident our independent franchisees who own and operate approximately 90 percent of our 14,000 U.S. restaurants will do the same."

The lunchtime protest was described as the first of its kind by the company's employees in the #MeToo era. Besides Los Angeles, similar strikes were scheduled for Chicago; Durham; Kansas City, Missouri; Miami; Milwaukee; New Orleans; Orlando; San Francisco and St. Louis.