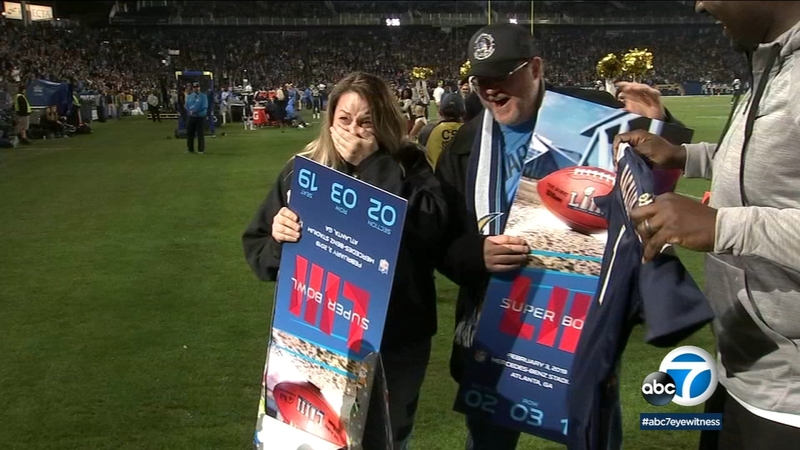 CARSON, Calif. (KABC) -- ABC7 teamed up with the Los Angeles Chargers to honor a local woman who became a hero during the Borderline mass shooting in Thousand Oaks.

ABC7 sports reporter Curt Sandoval presented hometown hero Melissa Rackley as she was honored by thousands during the Chargers-Baltimore Ravens game on Saturday.

She put her life on the line to save others as the bullets flew the night a gunman took the lives of 12 innocent people at the Borderline Bar & Grill, where she was the general manager.

When the gunfire erupted, Melissa Rackley grabbed those near her and rushed them into a small attic space above the ice machine. The terrified group hid out as the massacre continued below. Her brave actions during the deadly shooting saved six lives.

Melissa Rackley quietly texted her husband from the secret spot to say she was alive.

"It was very surreal, almost like it wasn't happening, but with every text that came through - sent and received -- I knew that she was still there, and I just wanted her in my arms," said husband Jr. Rackley.

Melissa Rackley said that after the mass shooting in Las Vegas, it was a co-worker who told her about the secret hiding spot she found in their building, just in case. Her heroism helping save so many others.

"I don't consider myself a hero," Melissa Rackley said. "I mean, for some reason I just did that and it just happened."