From history to food to holiday travel: Memorial Day by the numbers 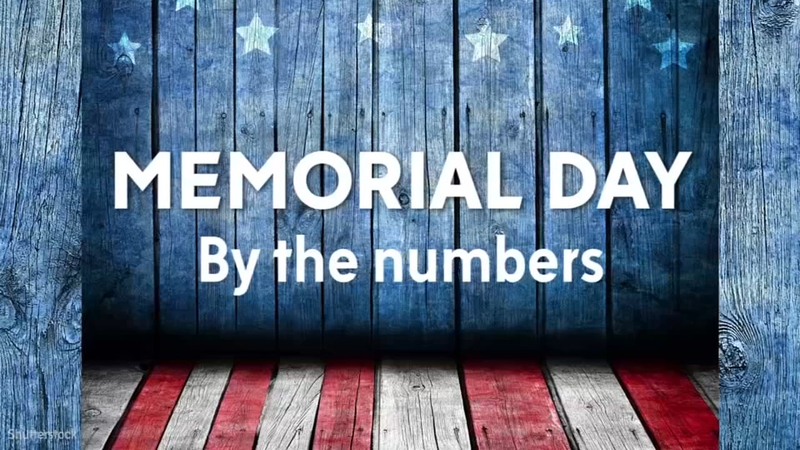 Memorial Day by the numbers

Americans kick off summer on Memorial Day, often traveling to see relatives, participate in parades, and eat a whole lot of hot dogs.

Here's a look at Memorial Day by the numbers, according to WalletHub.

Memorial Day, originally called Decoration Day, dates back to the Civil War. Its birthplace is disputed, as 25 American cities claim this title, according to WalletHub. The first state to officially recognize Memorial Day was New York in 1873.

The National Memorial Day parade in Washington, D.C. will be watched by an anticipated 1.5 million television viewers on Monday. More than 1,000 active duty service members participate in the parade, as well as more than 30 high school marching bands.

AAA's annual Memorial Day travel forecast predicts 2018 will reach near-record numbers. More than 41.5 million Americans are expected to travel more than 50 miles from home, with 36.6 million of those travelers hitting the roads.

One popular way to spend the weekend is taking advantage of deals in stores, which more than 40 percent of Americans said they are "likely" to do. WalletHub said shoppers can expect anywhere from 20 percent to 90 percent off of home goods and spring clothing. The personal finance site also put together a round-up of the best deals available from major retailers.

Another popular way to spend the weekend is to put on your running shoes. More than 200 running races are held each Memorial Day around the country, according to WalletHub.

Memorial Day is one of the most popular holidays for cooking outdoors, second only to the Fourth of July. According to WalletHub, 75 percent of Americans plan to cook out this weekend.