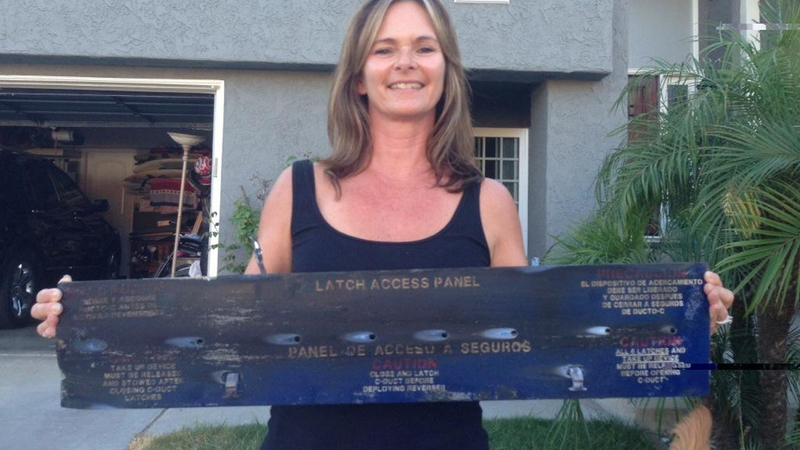 FOUNTAIN VALLEY, Calif. (KABC) -- A woman from Fountain Valley narrowly missed being hit by a piece of metal that came flying out of the sky on Thursday. The debris possibly came from a JetBlue airplane that made an emergency landing.

Cindy Gilbert kept the 3-foot piece of metal that slammed down on the sand 3 feet away from her as she rode her bike in Huntington Beach.

"It was a like a loud BOOM!" Gilbert said. "I was thinking, the Lord was watching over me."

Then around 9:30 a.m., JetBlue Flight 1416 made an emergency landing at Long Beach Airport. Officials said a warning signal went off when one of the engines started overheating, filling the passenger cabin with smoke.

Back in Huntington Beach, Gilbert, who was unaware of the emergency, was still trying to figure out what almost hit her.

"It kind of looked like it came from of a plane. I took pictures because my kids, they don't believe anything that I say, I have that proof," she said, laughing. "And so I took some pictures of it, and I thought, 'You know what? I'm just going to take this home.'"

She sent a text message to her husband, who was just hearing the news of the JetBlue emergency.

"I came home and we ran out and looked at the piece. I saw how big it was. I couldn't believe how big it was," said Bob Gilbert. "All the writing on it, and it's got all the flame marks. I thought, 'Wow, this thing is really cool. It's got to be from that plane.'"

So far it's unclear if the piece came from the JetBlue flight. But Gilbert expects to hear from federal authorities, and is more than willing to help anyway she can.

"I'm just thankful it didn't hit me or anybody else at the beach," she said.

Officials with the Federal Aviation Administration said they plan to get in touch with the Gilberts sometime Friday.