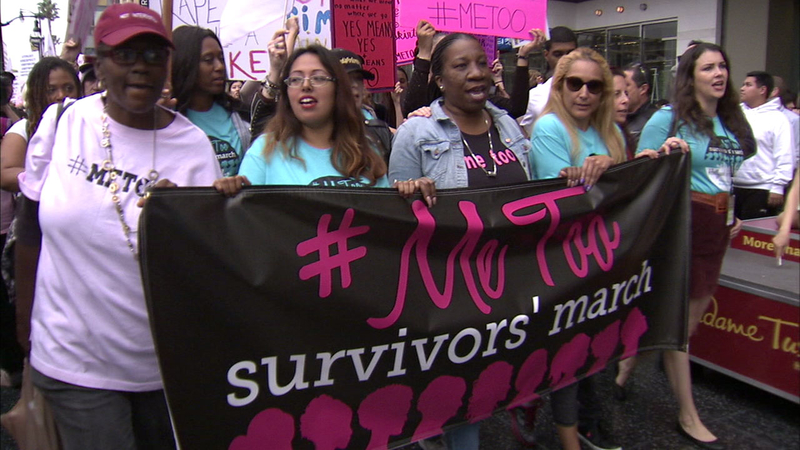 HOLLYWOOD, Calif. (KABC) -- Marchers took to the streets to take a stand against sexual assault and harassment for the #MeToo March in Hollywood on Sunday.

The demonstration started at 10 a.m. at Hollywood Boulevard and Highland Avenue, with a march to the CNN Building at 6430 Sunset Blvd., where a press conference was held at noon.

Sexual assault and harassment survivors and other participants of the march then walked back to Hollywood Boulevard and Highland Avenue for a rally.

"For every Harvey Weinstein, there's a hundred more men in the neighborhood who are doing the exact same thing. The conversation around harassment in Hollywood will broaden to include other industries if we force it to! It's not going to do it on its own. Sexual violence really doesn't know a race, a class, a gender. It can happen to anybody," said Tarana Burke, the founder of the MeToo movement.

Scheduled speakers included actress Frances Fisher, a national board member of SAG-AFTRA; Chelsea Byers of the Campaign to End the Statute of Limitations on Rape and Sexual Assault; and actress Estefania Rebellon, who conducted the ceremony.

Burke created the viral hashtag #MeToo, which has been used by women to share their personal experiences with sexual harassment or sexual assault.

The movement has exploded on social media as sexual assault allegations against powerful men in Hollywood and beyond continue to mount.

The goal of Sunday's event is to call on entertainment industry leaders to detail what they are going to do to address the crisis.

Organizers of the march said that Los Angeles is ready to take the issue on and work together to put an end to sexual harassment, sexual battery and rape.

"Sexual violence is something we have seen happen in the workplace, which is really where this began," Byers said. "But sexual violence takes hold in many other ways throughout society, and when we connect these stories and bring them to the forefront, to the public space, we can really start to address the different intersecting issues and the solutions that we require."