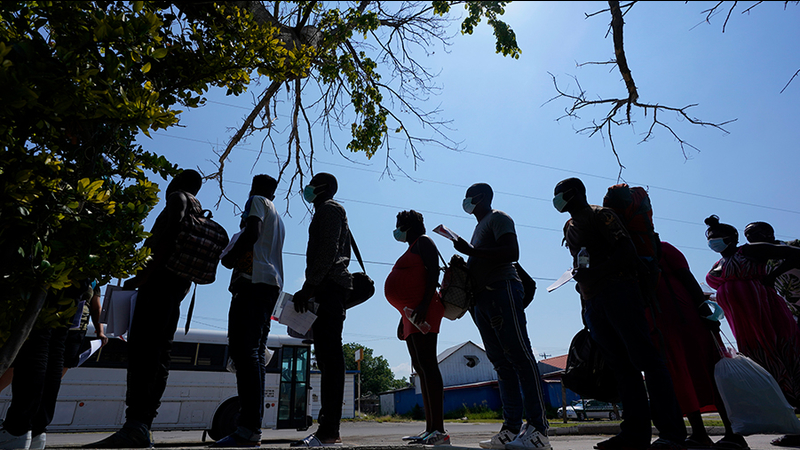 More migrants risking their lives for better life in US

WASHINGTON, D.C. -- The Biden administration on Wednesday proposed changing how asylum claims are handled, aiming to reduce a huge backlog of cases from the U.S.-Mexico border that has left people waiting years to find out whether they will be allowed to stay in America.

The video above is from previous reporting on issues along the border.

Under the proposal, routine asylum cases no longer would automatically be referred to the overwhelmed immigration court system managed by the Justice Department but would be overseen by asylum officers from U.S. Citizenship and Immigration Services, part of the Homeland Security Department.

RELATED: Why are migrants risking their lives to cross into US?

Advocates for the change see it as a way to help those with legitimate claims for protection while allowing officials to more quickly deal with people who do not qualify for asylum or are taking advantage of the long delay to stay in the United States.

"Individuals who are eligible will receive relief more swiftly, while those who are not eligible will be expeditiously removed," Homeland Security Secretary Alejandro Mayorkas said.

The proposal must go through a public comment period before it can be adopted as a new policy.

Immigration courts have an all-time high backlog of about 1.3 million cases. The Trump administration tried to deal with the issue in part by imposing stricter criteria for asylum and forcing people to seek protection in Mexico and Central America. President Joe Biden's proposal would streamline the process.

The reason for the change is that more people have been seeking asylum under U.S. law, particularly at the U.S.-Mexico border in recent years.

As the system works now, people who present themselves at the border or are apprehended by the Border Patrol and identify themselves as asylum-seekers must pass what is known as a "credible fear" interview. A USCIS asylum officer determines whether they meet the criteria of someone facing persecution in their homeland because of race, religion, nationality, membership in a particular social group or political opinion.

Even if they pass, their case is now referred to an immigration judge and they can wait years for a resolution.

The theory behind the proposed change is that experienced USCIS asylum officers can more quickly sort cases. People who are denied can ask an immigration judge to review the decision and seek an appeal if they are turned down again. Advocates for the new policy believe some with weaker claims may be dissuaded by the early denial.

DHS plans to hire 1,000 asylum officers and 1,000 support staff to handle the extra workload that will result from the change. USCIS already has has more than 400,000 asylum cases pending adjudication.

Doris Meissner, a former commissioner of the U.S. Immigration and Naturalization Service, had previously called for adoption of this change, saying in a recent Migration Policy Institute opinion piece that it is "potentially a game changer" that would balance humanitarian protection for those eligible with the need to control the border.

"The recent increase in arrivals at the U.S.-Mexico border, which are the latest in a series of periodic spikes, make this change all the more compelling," wrote Meissner, now a senior fellow at the institute.

Immigrant advocacy groups welcomed aspects of the proposal, but there were still critics. Human Rights First, for example, said asylum-seekers should be able to get a full rehearing of their case, not just a review, from an immigration judge if their petition is denied and should not be subject to the fast-track deportation process known as expedited removal if they are determined to be ineligible to stay.

"The proposed rule could be used and abused to rush asylum-seekers through adjudications without sufficient time to secure legal representation, gather evidence or prepare their cases, leading U.S. agencies to return to persecution people who actually do qualify for asylum," said Eleanor Acer, the group's senior director for refugee protection.

The rate at which asylum is granted varies widely by a person's country of origin and circumstances. It was approved over the past year for 10% of applicants from Honduras and 11% for people from Guatemala while the rate for people from China was 37% and 51% for petitioners from Venezuela, according to the most recent statistics from the Executive Office for Immigration Review.
Report a correction or typo
Related topics:
politicswashington dcimmigration reformmexicocrisis at the bordercourtthe white housecitizenshipjoe bidenu.s. & worldborder crisisimmigration
Copyright © 2021 by The Associated Press. All Rights Reserved.
IMMIGRATION
Border Patrol finds young siblings with note abandoned at river
Son, mom separated at the border detail journey after years apart
Supreme Court orders 'Remain in Mexico' policy reinstated
Mexican ambassador visits SoCal, discusses border security
TOP STORIES
LA County sheriff's deputy killed in off-duty Temple City crash
Video shows Gabby Petito's police encounter before disappearance
Convicted rapist denied bid for freedom after DA shifts position
Baby girl born to widow of Marine killed in Kabul bombing
CA to take in 5,200 Afghan evacuees, more than any other US state
Yamashiro hires first female executive chef in its 107-year history
Powerball ticket worth $2.5M sold at Compton liquor store
Show More
Family mourns OC man killed in hit-and-run crash
Homeless veteran fatally stabbed at Brentwood encampment
Proof of vaccination to be required for indoor areas of LA County bars
Calls for justice grow after school officer body slams Lancaster teen
Bialik, Jennings to guest-host 'Jeopardy!' for rest of year
More TOP STORIES News