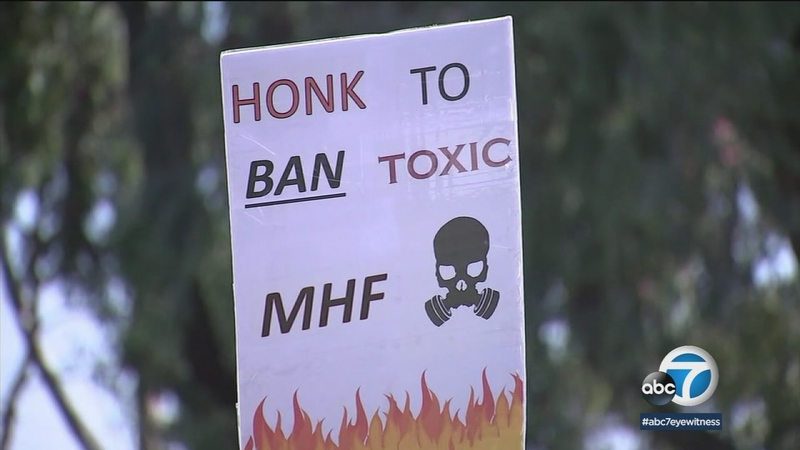 TORRANCE, Calif. (KABC) -- Hundreds of protesters took part in a march to the Torrance Refinery on Saturday, calling for a ban on the facility's use of modified hydrofluoric acid, or MHF.

Activists said three years ago, an explosion at the refinery nearly caused a catastrophic release of the highly-toxic chemical.

"By the grace of God, it did not puncture a tank of modified hydrofluoric acid," resident Jennifer Vollbracht said.

The 2015 explosion rocked the community and had sent a heavy piece of equipment in the direction of a tank filled with the acid. Experts said the MHF can cause severe burns, organ damage and even death.

"If that very heavy piece of equipment had gone 5 feet farther, the accident would have released a toxic ground-hugging cloud that could kill people all the way to the beach," said Sally Hayati, with the Torrance Refinery Action Alliance.

The refinery is aware of the community's concerns. In a statement, the company said the explosion occurred under a previous owner.

"Since acquiring the refinery on July 1, 2016, we have been investing in our people, plant and processes to improve the overall safety, reliability and performance," it said.

Protesters said they want the refinery to replace MHF with a less dangerous chemical.

"There's no acceptable level of likelihood for a release of hydrofluoric acid. The consequence is just too great to let there be any chance of having this happen," Vollbracht said.