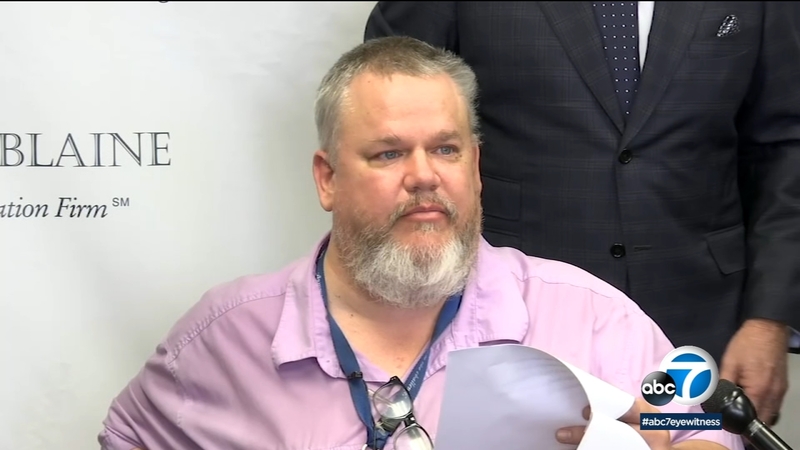 SANTA ANA, Calif. (KABC) -- A former client of attorney Michael Avenatti is suing the embattled lawyer for at least $9.5 million for allegedly failing to provide all the settlement money from his case.

"I wish you had just given me my money," Geoffrey Johnson said in a simple message for his former lawyer.

Johnson, while suffering from unspecified mental health issues in April 2011, was wrongly arrested by Los Angeles County Sheriff's Department deputies. While he was in jail, he attempted suicide twice. The second time, he jumped from the second floor of the jail, which left him paralyzed from the injuries.

He hired Avenatti to represent him, suing the county for "physical injury and emotional stress."

"I had no idea I had put my trust in the wrong person," said Johnson. "I never thought I would get victimized by my own attorney."

Johnson won a $4 million settlement from the county in 2015. The lawsuit alleges Avenatti pocketed the check and lied to Johnson about it.

The claims are part of the ongoing federal cases against Avenatti, which include charges of wire fraud, bank fraud and extortion. He's pleaded not guilty to the charges.

As part of a statement, Avenatti provided documents showing Johnson's signature on statements that the lawyer conducted himself ethically at all times and he was thankful for the lawyer's assistance.

Callahan claims Johnson was coerced into signing those documents.

"This is old news and was first reported on almost two months ago. Mr. Johnson's claims are categorically false and frivolous, and his case will be thrown out of court. He previously agreed on numerous occasions, including in multiple detailed writings which he reviewed, initialed and signed (after a different lawyer reviewed), that I conducted myself ethically at all times, he was kept informed about all aspects of his case, he was provided all monies when due, he had been advanced huge sums for his living and medical expenses, he had received a proper accounting, and he was extremely thankful for my assistance, which was provided after no other lawyer would take his case. Any claim that Mr. Johnson was 'tricked' into signing documents that he fully read and understood is absurd. But for my assistance, Mr. Johnson would have been convicted of the multiple crimes he was charged with relating to his alleged assault of a nurse and would have been destitute six years ago. We paid his medical expenses and living expenses for years prior to any settlement. And we provided him with settlement monies after we deducted our contingency fee and the huge costs associated with his case as we were entitled to. He clearly is disturbed and it is unfortunate that he is being used by his Republican Trump supporter lawyer and others as part of a "pile on" publicity stunt to smear me."
Report a correction or typo
Related topics:
orange countylawsuitlegal
Copyright © 2021 KABC-TV. All Rights Reserved.
TOP STORIES
Jo Lasorda, widow of former Dodgers manager Tommy Lasorda, dies at 91
Video appears to show man force woman into car in Bell Gardens
Man killed, 4 injured after shooting, crash in El Monte
2 boys last seen in Altadena reported missing
J&J says 2nd dose of vaccine after 2 months results in more protection
Speaking to UN, Biden says world at 'inflection point' amid crises
Autopsy set to be performed on Petito; Laundrie remains missing
Show More
First look inside the new Academy Museum of Motion Pictures
Pilot arrested for 3 OC sexual assaults
COVID-19 has now killed as many Americans as Spanish flu
911 call: Brian Laundrie 'was slapping' Gabby Petito
DWTS recap: JoJo Siwa, pro-partner Jenna Johnson make history
More TOP STORIES News