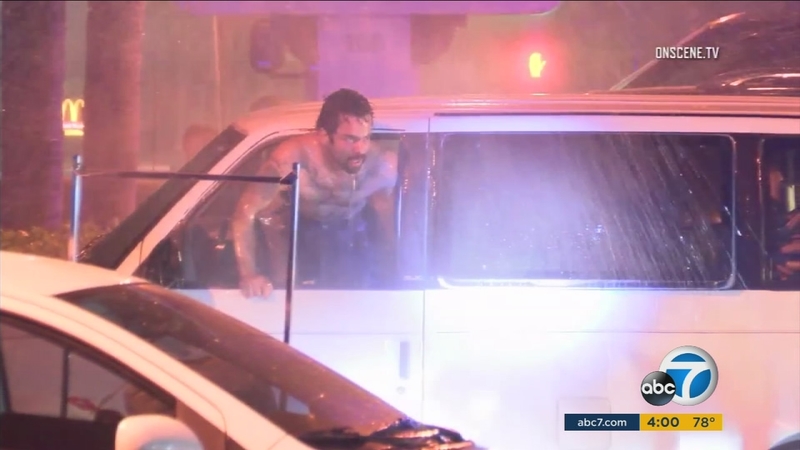 ORANGE, Calif. (KABC) -- The widow of an armed man who was shot and killed by police following a violent scuffle in Orange on Monday spoke exclusively with Eyewitness News.

The dramatic confrontation, which stemmed from a traffic stop, was all caught on camera.

The suspect's estranged wife, who asked to not be identified by Eyewitness News, identified him as 33-year-old Michael Perez.

Officers pulled over Perez, who parked the white van he was driving at a shopping center in the 100 block of Katella Avenue at about 12:30 a.m., according to Orange police.

It was unclear why Perez was pulled over, but when police ran the plates on his vehicle, it showed there was an outstanding warrant, authorities said.

The traffic stop then escalated when police said Perez produced a gas can inside the van and lit a cigarette. Officers were concerned he was going to light himself on fire or produce more combustibles that could cause a hazardous blaze.

After talking to him outside the driver's side window, one officer crept up to the passenger's side, busted out the window and used a hose to spray Perez. Police said instead of forcing him out of the vehicle, Perez moved to the back of the van.

"I've been here for 22 years. I don't know that I've ever even heard of a plan like this. I think it was an excellent idea to use the water to prevent him from lighting himself on fire," said Lt. Fred Lopez of the Orange PD.

Video shows Perez coming out the driver's side door and a scuffle ensuing. People are heard yelling the word "knife" before two shots are fired. Authorities later confirmed Perez was armed with a knife when the shooting occurred.

Perez was rushed to the hospital where he later died. No officers were injured in the shooting.

Perez's widow said he had lived in the van for over a year and he'd been addicted to methamphetamine for some time. She said Perez couldn't change his ways and told her he wanted to die.

Perez's estranged wife, who said she had four children with him, had not seen him in over a month.

While she said Perez was battling several issues, she believed police could've handled the situation better. Instead of killing Perez, his widow said they could've helped him.

Perez's widow said he would have turned 34 on Wednesday.