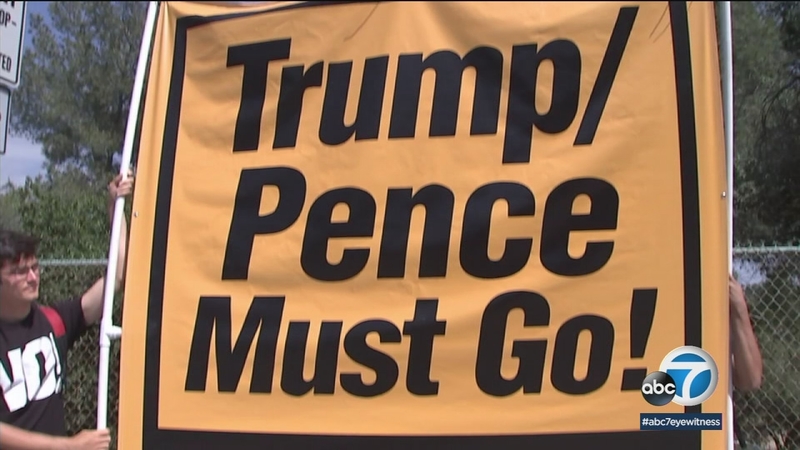 Pence greeted with protests during visit to JPL in Pasadena

PASADENA, Calif. (KABC) -- Protesters gathered to make their voices heard as Vice President Mike Pence arrived at JPL for a private tour just a week before NASA launches its next mission to Mars.

"The fact that this person is here at NASA. That is an outrage. These people are anti-science - talk about 'alternative facts,'" protester Michelle Xai said.

Pence arrived at Hollywood-Burbank Airport Saturday afternoon for a weekend of political fundraisers, the JPL visit and a trip to see the construction of the border wall.

During his JPL visit, a minor confrontation between protesters, horse owners and competitors at Flint Ridge Riding Club happened across the street.

Many people there were angry about the loud demonstration.

"Them screaming can cause a horse getting spooked and that could cause serious damage to someone or a horse," equestrian Ricky McLewe said.

But those protesters expressed their constitutional right to assemble and continued to vocalize their frustration with Pence over many key issues.

"He may love America, but the majority of Americans that disagree with his policy - along with Trump - love it even more. That's why we will not give up until we vote him and Trump out," protester Brooke Tealrobbins said.