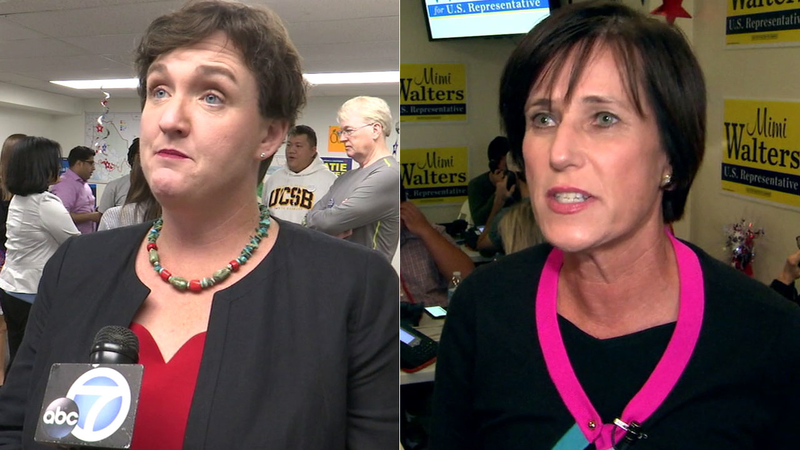 "Nancy Pelosi is desperate to get that gavel back and be speaker again and she knows the only way she can do it is through Orange County, so I'm not surprised she's investing as much as she is," said Walters.

Porter, a UC-Irvine law professor who is backed by Sens. Elizabeth Warren and Kamala Harris, has worked extensively in consumer protection.

"She had Trump's values long before Trump became president," Porter said. "People can look at her values and her record in the state Senate and Assembly, where she did things like call gay marriage a travesty of family values. Where she voted against common-sense gun reforms like background checks. She's just continued her extreme conservative voting record voting with Donald Trump 99 percent of the time even when it hurts Orange County."

Walters says she opposes Trump's tariffs and his plans to raise the federal gasoline tax. But the congresswoman thinks she'll get re-elected based on the legislation Republicans have passed in Trump's first two years.

"My constituents are very happy with what's been happening in the economy. We have rolled back Obama-era regulations. We've given a tax cut to the people. People have more money in their paychecks," said Walters.

Porter argues the success of the stock market hasn't found its way into communities like Mission Viejo and Tustin.

"When we let people know that Mimi Walters has turned her back on California families, voting to raise their taxes, take away healthcare for those with preexisting conditions, we win," said Porter.

Similar to other parts of Orange County, the changing demographics in the 45th, with more young and diverse voters, favors Democrats. In the district, 37 percent of registered voters are Republican, 30 percent are Democrat and another 28 percent have no party preference. A big issue in the race is the proposition to repeal the gas tax, which Walters says her opponent was against during the primary, but now supports.

"The only reason why she's for the repeal of the gas tax now is because she knows how high it polls and that this district wants to repeal the gasoline tax. The problem with my liberal opponent is that she doesn't have a record to stand on. She can say whatever she wants to say to whatever group she's talking to," said Walters.