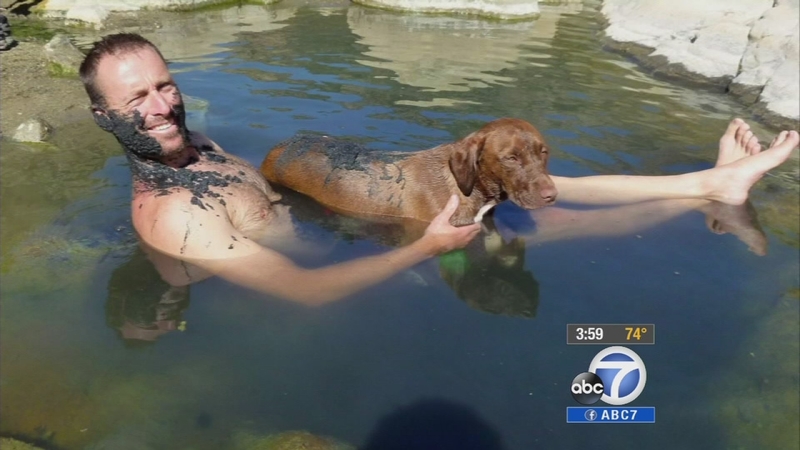 FILLMORE, Calif. (KABC) -- A missing Arcadia firefighter's dog was found Thursday afternoon as crews continued searching for Mike Herdman in the Los Padres National Forest. Minutes later, the dog escaped from rescuers and was on the loose again.

Officials were preparing the dog to be flown back to the command center, but he was frightened when the chopper came down to pick him up.

"We're trying to capture the dog and potentially use the dog as a resource because the assumption is that the dog would have the knowledge and capability to go back to camp or back to the car," said Ventura County Sheriff's Sgt. Eric Buschow. "If he's hanging around an area, it's probably because Mike's there."

Herdman and his friend were hiking deep into the back country along Sespe Creek when Herdman's dog Duke ran off on June 11. The Dana Point resident chased after his dog, barefoot and wearing only shorts and a T-shirt, and he hasn't been seen since. It took Herdman's friend two days to hike out and alert authorities.

A fixed-wing drone and a helicopter drone are now being used in the search for 36-year-old Herdman, who has not been seen in six days. The FAA approved a request to use the drones on Wednesday. Each drone is equipped with an infrared camera that can detect Herdman's body heat.

Department of Homeland Security personnel were also brought in to assist in the search. The rapid response team traveled 15 miles by chopper into the wilderness.

"It wasn't as chilly this morning. There was favorable weather overnight," said Ventura County sheriff's Sgt. Eric Buschow. "That bodes well for Mike as he's out there."

One injury has been reported during the search efforts. Bill Herrera, an assistant fire chief from Fillmore, was bit in the hand by a rattlesnake. He was flown to Las Robles Hospital in Thousand Oaks for treatment.