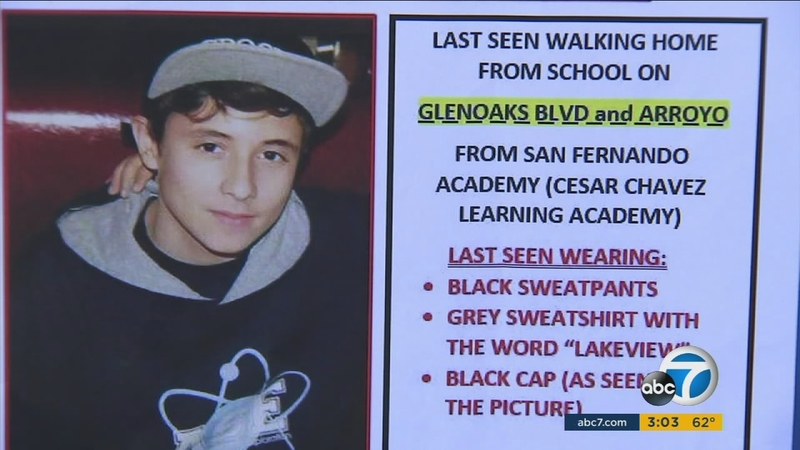 SAN FERNANDO, Calif. (KABC) -- The FBI joined in the search Friday for a teenager who has been missing for more than a week in San Fernando.

In addition to the federal agency joining the search, a $50,000 reward has been offered for anyone who can help find 14-year-old Elias "Eli" Rodriguez. He was last seen on Feb. 17 in the 1000 block of Arroyo Street after he had left Cesar Chavez Learning Academies.

Friday was a day of heavy rains and crews flew over washes in the area, but did not find anything. An anonymous tip led authorities to the Red Line station in North Hollywood and security footage was checked, but they could not verify the reports or contact the tipster.

On Tuesday, the family and police asked the public to aid in the search for Rodriguez. His family said he has never run away before. They also said every day after school when he doesn't see his mother there to pick him up, he will head to his grandmother's home down the street.

His relatives and friends have all said they have not heard from him since Friday. Authorities said his cellphone hasn't pinged a cell tower since he went missing.

Eli was last seen wearing a black baseball cap, gray sweatshirt with "Lakeview" written on it and black sweatpants. He is 5 feet 4 inches tall, has brown hair and brown eyes and weighs about 100 pounds.

The FBI and local law enforcement agencies headed back to the neighborhood where he went missing in an effort to gather more evidence and talk to residents.

"Contact people. Ask the individuals, ask residents of this area if they see anything out of the ordinary," said Capt. Robert Marino of the LAPD. "If they see a peculiar car, a truck, anything that would allow us to gather some information in locating Elias."

His family and friends will be handing out fliers in the area Saturday morning.