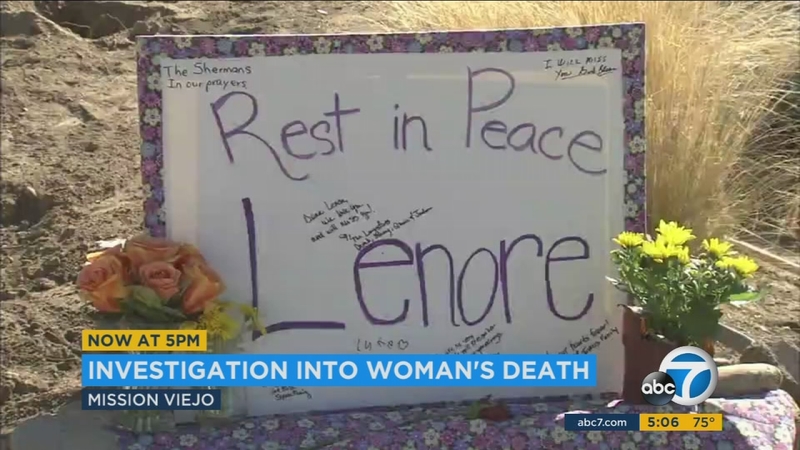 MISSION VIEJO, Calif. (KABC) -- Residents of a normally quiet Mission Viejo neighborhood were left with many questions after the body of a woman was discovered.

Two days after the body of 76-year-old Lenore Powell was found, authorities said her 53-year-old son Stephen Nelson was taken into custody for an unrelated crime at the home that he shared with her.

An autopsy performed Monday failed to determine the exact cause of death, said Lt. Mark Stichter, the spokesperson for the Orange County Coroner's Office.

"We have to await further test results," said Stichter. "However we have not ruled out foul play."

Powell's body was found in the bushes behind a U.S. Bank in Mission Viejo, less than a mile from her home on Thursday. Officials stated her body had suffered some decomposition.

Neighbors set up a small memorial in front of Powell's house, where the front lawn was ripped up, as part of a landscaping project.

"She was a super woman, a super teacher, a good friend, a good mother," said Cleo Martinez, who said she and Powell built their houses at the same time in the 1960s.

Friends said Powell was a retired teacher who was active in her church.

"I will just miss her so much," said Martinez. "I just feel so bad that Lenore had to go this way."

The day after Powell's body was discovered, neighbors say Orange County Sheriff's deputies showed up in their neighborhood and started asking questions.

"(They) wanted to know if we had heard any noise the Saturday before or Saturday evening..if we heard any noises coming from the house," recalled neighbor Sherri Regalbuto.

On Saturday, deputies arrested Nelson after he allegedly threatened a landscaper who was doing work at the house, according to Stichter.

Stichter also alleged Nelson stole property from the worker. One neighbor said they heard Nelson fighting with a landscaper at the house.

Another neighbor, who wished to only be identified as "Li," said Powell's son would also get into verbal disagreements with his mother since moving back home years ago.

"I don't know what's the reason," Li said. "I'm just so sad about the ending to her life story."

Stichter confirmed deputies were called to the home several times, as far back as 2002, but so far, they have not provided details of those calls.

Her son was expected to appear in court on Tuesday in connection with the robbery case.