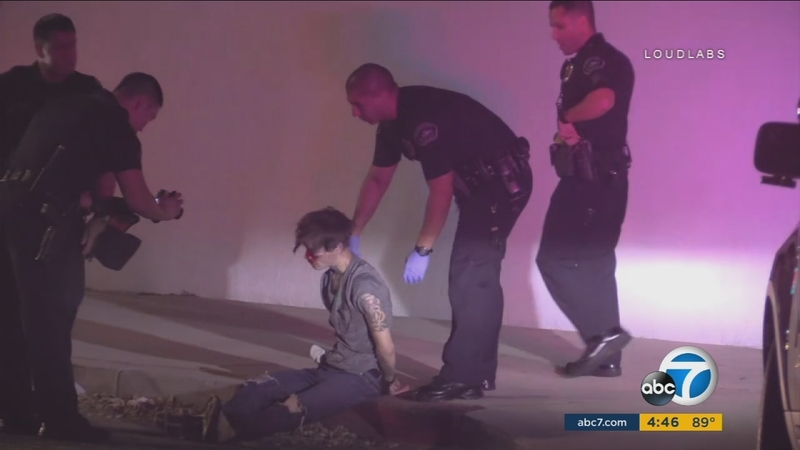 BURBANK, Calif. (KABC) -- A man suspected of walking into a Burbank mixed-martial arts studio with a loaded gun left in an ambulance and in handcuffs after he was subdued by an instructor, police said.

He got into a confrontation with an instructor who is an accomplished MMA and muay thai fighter.

The instructor said the suspect confronted him in an aggressive manner and then appeared to be reaching into his bag for a weapon.

At that point, the instructor used his martial arts training to subdue the man and hold him as one of his students called the police.

"The instructor based on his experience and training level believed that this person was there to harm him and was possibly reaching for a weapon," said Burbank Sgt. Derek Green.

Green said police generally don't encourage engaging with an aggressor, but in this case it appears the instructor acted appropriately.

Officers say they found a loaded gun in the suspect's bag.

The man was seen bleeding from the face as officers spoke to him outside the studio. He was then transported by ambulance to a local hospital.

Police say they believe the instructor and suspect were acquainted with each other.

An owner of the business told Eyewitness News that the suspect is a veteran who was having some difficulties and had been introduced earlier to the instructor for training.

The instructor says he does not wish to press charges and hopes the man can get some help.

The instructor, who did not wish his name to be used, had some advice for the public: "If you get a chance to take martial arts or learn judo or jujitsu or any type of self-defense it could save your life. You might only need it once, but that one time might save your life, so it is worth it."
Report a correction or typo
Related topics:
burbanklos angeles countymmamixed martial artsguns
Copyright © 2021 KABC-TV. All Rights Reserved.
TOP STORIES
LA County issues order requiring all county employees to be vaccinated
Corona shooting suspect blames voices in his head
Dixie Fire engulfs NorCal town, leveling businesses
3.5-magnitude earthquake strikes Hemet area, USGS says
LA to consider requiring vaccination to enter public indoor spaces
Man steals truck after getting out of Glendale jail, police say
Driver kills 91-year-old woman in South LA, flees scene
Show More
10 killed when van crashed into pole near border, DPS says
Child under 12 among new COVID deaths reported in LA County
SoCal congressman introduces legislation for 4-day workweek
Mexico sues U.S. gunmakers, blaming them for bloodshed
Man arrested for planting Molotov cocktails at Metro station
More TOP STORIES News